National Union of Journalists and Amnesty International held a candlelight vigil at the Saudi Arabian Embassy in Dublin to protest the murder of Jamal Khashoggi. Video: Enda O'Dowd 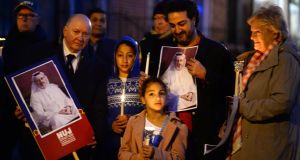 Séamus Dooley (L) of the NUJ is seen during a vigil at the Saudi Arabian embassy over the murder of journalist Jamal Khashoggi. Photograph: Cyril Byrne/The Irish Times

A vigil to remember the Saudi journalist Jamal Khashoggi was held in Dublin on Thursday evening.

About 30 people gathered for the vigil outside the Saudi Arabian embassy on Fitzwilliam Square.

Mr Khashoggi was murdered inside the Saudi Arabian consulate in Istanbul, Turkey, on October 2nd. Turkish authorities said on Wednesday that Mr Khashoggi was strangled “as soon as he entered” the consulate.

Mr Khashoggi, a veteran Saudi commentator who had grown increasingly critical of his country’s rulers, had entered the consulate to collect papers for his planned marriage.

The National Union of Journalists (NUJ), which organised the event with Amnesty International Ireland, presented a letter to the Saudi Arabian ambassador to Ireland, Adbulaziz Abdulrahman Aldriss.

In the letter, the NUJ said it wished to record “our deep concern at the actions of your government”.

“We demand that your government co-operate fully with an independent investigation into the murder,” the letter said.

“The murder of a journalist in a consulate and the unspeakable manner of his killing serves as a rallying cry to the international community,” it added.

Séamus Dooley, the NUJ’s secretary for Ireland, said the vigil was also organised to shine a light “on the manner in which governments throughout the world have failed to protect journalists and journalism”.

“Jamal’s death has enraged all who care about human rights and his brutal murder demands a global response,” Mr Dooley said.

“May his death light a flame of resistance to the relentless attacks on journalists; may Jamal’s brutal murder serve as a wake-up call to the UN and to governments.”

The NUJ has also called on the Government to “unequivocally support” a proposal put forward by the International Federation of Journalists (IFJ) for an international convention on the safety and independence of journalists and other media professionals.

“According to IFJ statistics, at least 74 journalists have lost their lives while carrying out their duties since the beginning of the year. Today only one out of 10 killings of journalists is resolved,” Mr Dooley added.

Those gathered for the vigil held candles and posters with pictures of Mr Khashoggi. Among the attendees was Ibrahim Hashem, a friend of Mr Khashoggi, who said he was “a lovely man” who was “trying to bring out positive reform”.

“He was very straightforward, very honest, a very gentle man,” he said.

Meanwhile, People Before Profit TD Richard Boyd Barrett said there should be “severe sanctions” imposed on the Saudi regime for the murder.