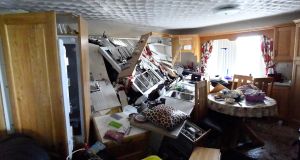 A destroyed home after a landslide carrying a boulder and car came through a house during torrential rains in Urris, Co Donegal. Photograph: Clodagh Kilcoyne

Hundreds of people whose lives have been turned upside-down by extensive flooding across Co Donegal have been told they will not be forgotten.

The worst of the flash floods ravaged the Inishowen Peninsula and the fallout from the flooding is still being felt across towns and villages in Donegal.

An emergency meeting of Inishowen Municipal Authority was held on Thursday in an attempt to tackle the ongoing crisis and to form a plan to help families.

Donegal County Council staff told councillors as well as Mr McHugh and Mr Moran that the local authority would not be found wanting when it came to helping families get back on their feet.

The council’s director of services for roads and transportation, John McLaughlin, said, “Money won’t be an obstacle here. We will do our best. We will not hold back. We have a responsibility to this area.”

The meeting was told that 17 families have been left homeless by the flooding that particularly affected Carndonagh, Burnfoot, Muff, Buncrana, Cockhill, Clonmany and Quigley’s Point.

Aideen Doherty, the area manager for Housing and Corporate Services, confirmed the list of homeless families.

“We have offered B&B services, but most are staying with close family and friends. We are in constant dialogue with these people.

“Our initial responders ensured that families were brought to safety and we had staff on the ground from around 6.30 in the evening.”

No cost has yet been put on the overall damage caused to infrastructure and buildings.

A spokesman for Donegal County Council said, “The council are continuing to assess the extent of the damage to the Inishowen area after Tuesday night’s flooding and figures regarding the cost of the destruction are not available at this time. We will make these figures available as soon as we have them.”

“We would also ask that anyone in the Inishowen area that needs to contact the council with housing, roads or humanitarian issues arising from the recent floods does so on 074-91 53900 or out of hours on 074-91 72288.”

The council said it can also provide humidifiers and skips to those who need them.

Among those who felt the full force of the flooding were staff working for The Point Inn in Quigley’s Point.

The building was badly damaged and must close for at least six months with the temporary loss of about 15 jobs.

Owner John McLaughlin confirmed his premises were badly damaged and that he had held a meeting with staff to tell them the news.

Mr McHugh has said he is confident a financial assistance scheme for victims of the Donegal flood will help families.

“My Government colleague Regina Doherty and the Department of Social Protection is working to provide immediate financial supports to families and individuals affected by the severe weather and flooding in Donegal,” said Mr McHugh.

“Colleagues across Government have been working hard since the early hours of Wednesday to ensure that all assistance is made available to the people of north Donegal and in particular Inishowen.

“I am grateful to Social Protection Minister Regina Doherty and her officials who have today activated its Humanitarian Assistance Scheme which is available to assist people whose homes are damaged by flooding and who are not in a position to meet costs for essential needs, household items and in some instances structural repair.”

Financial support under the Humanitarian Assistance Scheme will be initially targeted at the immediate needs of those who affected by the flooding (providing things such as clothing and food), with financial support for household items and structural repair to be made available as the clean-up operations begin.

However, many fear a repeat of Tuesday night’s flooding could strike again soon.