‘Go home , hug and kiss your loved ones, tell them how much they mean to you,’ Geraldine Mullan says 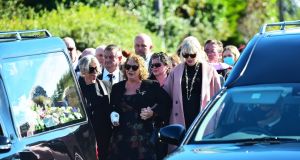 Geraldine Mullan during the funeral of her husband John and children Tomas and Amelia Mullan at St Pius X Parish Church in Moville. Photograph: Colm Lenaghan/Pacemaker 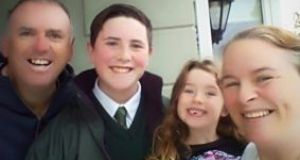 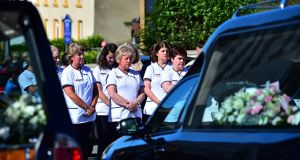 The woman who lost her husband and two children in a horrific car crash in Co Donegal has pleaded with mourners to hug their loved ones and tell them how much they love them.

Mourners outside St Pius X Church in the seaside town of Moville wiped tears from their faces as Geraldine Mullan said a final farewell to her family.

All three died when the family’s car plunged into Lough Foyle at Quigley’s Point on Thursday evening last on the way home from a family day out.

Geraldine managed to escape from the car but husband John (49) and children Tomás (14) and Amelia (6) died.

A composed Mrs Mullan paid tribute to all those who had comforted her in recent days but ultimately paid tribute to the three most important people in her life — her late family.

She told mourners “Go home and hug and kiss your loved ones and tell them how much they mean to you. John did that every morning for me and he will do it again when we are together again.”

Mrs Mullan recalled the moments when her life changed forever but stressed that there was no way that John could be blamed .

She said “Everything was against us. There was a high tide, water on the road, roadworks and slippery road conditions.

“John was the safest of drivers. There was no speed or no reckless driving.

“I have no answers, but I can picture that night, second by second. In seconds, our lives changed completely. At 9.30pm on Thursday, August 20th, my life was irrevocably changed for the worst.

“We landed upside down in the water and my dear husband could not get out and was pinned in due to his injuries.”

She also revealed how her son had been the perfect big brother to sister Amelia — even in their final moments.

“Everyone knew Tomás was the perfect big brother and, when the divers found him, he had his arms wrapped around his little sister.”

She paid a special tribute to her loving husband whom she described as her best friend.

She said he would have been 50 in two weeks time. It was always his dream to go to Cape Canaveral in America, as he loved space travel, but due to Covid they couldn’t go.

“Instead, we had 50 little presents hidden all around the house for him. Now, I have no one to give those presents to, but I will go out to Ballybrack (cemetery) and sing him a happy birthday.”

“Thanks for minding Amelia, right up to the end,” she said, looking down on his coffin.

She paid tribute to the emergencies services, including Kevin Barr of the RNLI lifeboat.

“He had a hard job of getting me out of the water and I screamed at him ‘would you let me go so I can be with them’. I was left behind for a reason, but I don’t know what that reason was.”

She said she will continue helping out with the local Moville GAA club every Saturday morning, even though she has no kids.

Earlier the funeral cortege carrying the three coffins made the short journey from the Mullan family home less than a mile away in glistening sunshine.

The nearby Lough Foyle, which hugs the seaside town, was calm and glass-like, a contrast to just a few short days ago when it claimed the lives of the father and two children.

Mrs Mullan (45) supported by two friends, led the funeral cortege as it made its way to the church, singing loudly the names of her husband and children.

Hundreds of mourners waited near the church while the three coffins were taken in, with Mrs Mullan helping to escort each coffin into the church.

Among those showing their support for the heartbroken family were staff from Letterkenny University Hospital where Geraldine worked as a cancer nurse.

Parish priest Fr Pat O’Hagan told Geraldine in his homily that if love could take away her pain then she would be pain-free.

Fr O’Hagan, parish priest of Moville, addressed just 50 mourners who were allowed into St Pius X Parish Church because of Covid regulations. However, many thousands more stood outside or watched a live-streaming of the heart-wrenching mass.

Fr O’Hagan told Mrs Mullan “There’s been an outpouring of love especially for you, Geraldine, in your loss.

“If support, sympathy and love could take away your pain, you’d be pain-free.

“If they could take all this away, we wouldn’t need to be here this morning.

“But they can’t. And we find ourselves here, doing the last thing we’d want to do, if only we could choose.

“And we’re here, in this church, offering Mass for John, Tomás and Amelia. And we’re praying with and for Geraldine and all those who feel some of her pain.”

He said the town and community had been overwhelmed with the events of last Thursday and left people reeling with a sense of shock and disbelief.

Before the mass started, Geraldine’s father Martin Connuaghton thanked the emergency services on the night and also to the people of Moville for comforting Geraldine in recent days.

He paid a special tribute to local man Conor McDaid who was first on the scene when he noticed the lights of the Mullan car going off the road.

He was described as a “guardian angel” who helped to rescue Geraldine from the waters of Lough Foyle.

Tributes were then paid to Amelia, Tomás and John by members of both families. Amelia was described as a “wee rascal” and a “wee lady” who lit up rooms with her bubbly personality.

Tomás was described as a quiet, young gentleman who loved music and who always looked after his little sister and was her knight in shining armour.

Their father John was described as a gentleman who lived most of his life in Moville and would do anything for anyone.

Among the gifts brought to the altar included a ‘Our Generation’ doll and pink CD player for Amelia, an accordion and Harry Potter book for Tomás as well as a Manchester Utd scarf, a family photo and a guitar for John.

Mourners were told that the guitar was a birthday present which Geraldine, Tomás and Amelia had planned to give John for his 50th birthday .

Among the music played was a piece of accordion music recorded by Tomás as part of his homework during lockdown.

In his homily , Fr O’Hagan said the readings of the mass would hopefully make some sense of the “horrendous tragedy.”

He added “We will never forget John, Tomás and Amelia – who they were and what they meant to those of us who were privileged and blessed to know them.

After the funeral mass the three coffins carrying John, Tomás and Amelia were brought to the nearby Ballybrack Cemetery in Greencastle for burial.