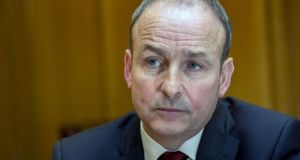 Taoiseach Micheál Martin has said that he made his anger very clear to EU Commissioner Phil Hogan about his attendance at the Oireachtas Golf Society event in Clifden. Mr Martin also said that the event should never have happened. File photograph: Brenda Fitzsimons

Taoiseach Micheál Martin has said he would like to see a “very comprehensive statement” from Phil Hogan to fully explain his position, after it emerged he was stopped driving in Kildare before attending the Oireachtas Golf Society dinner.

Speaking on RTÉ radio’s Today with Claire Byrne Show, Mr Martin said that given there was a discrepancy between Mr Hogan’s statements, he needed to know that the restrictions in Kildare were not breached. He said he and the Tánaiste have asked the Garda Commissioner for full details on the incident.

“We are holding a light on the anger of the Irish people to what they regard as an unacceptable breach of the guidelines by people in office.”

Mr Martin said he had received a call from the Minister for Justice Helen McEntee to inform him that Mr Hogan had been stopped by gardaí for using a mobile phone while he was driving in Kildare. Mr Martin said it was very serious.

Gardaí were at the forefront of implementing guidelines, he added. The question was if Mr Hogan had been in full adherence of the restrictions.

There was understandably a lot of anger from the public about what had happened, he said. People had made huge sacrifices, particularly people who lost loved ones and could not give them a proper funeral.

In a statement, Mr Hogan’s spokesman said the commissioner was stopped by a garda for using his mobile phone while driving while he was in Kildare en route to Clifden. “He stopped briefly at his apartment [in the K-Club in Kildare] to collect personal belongings and essential documents relating to the EU-US trade negotiations, which continued while the Commissioner was in Galway.”

Mr Hogan was one of more than 80 people, including a number of senior politicians and a member of the judiciary, who attend the dinner in Clifden, Co Galway last Wednesday, in apparent contravention of Covid-19 restrictions.

Micheal Martin said that Mr Calleary has also resigned as national secretary of the party and that his colleague is “very, very sorry” for attending a golf dinner during the pandemic.

It comes days after the Mayo TD resigned as minister for agriculture in wake of the golf society dinner in Galway.

Mr Martin said Mr Calleary volunteered to step down from the roles.

He said: “He knows he did wrong, he knows he got it wrong and he understood the key point that the actions by him... he doesn’t play golf, but by going down to speak he essentially was undermining the authority of the Government to bring in restrictions.”

A resurgence in Covid-19 cases in recent weeks has led Ireland to backtrack on some of its plan to reopen society after lockdown.

The function was held across two rooms in the hotel in Clifden.

Supreme Court judge Seamus Woulfe was among others on the guest list.

Mr Martin said he could not call for the former attorney general to step down as there is a separation of powers.

Mr Martin also denied that the Government is falling apart, adding that it is “tenable”.

“It will survive. I’ve had good meetings with (Tánaiste) Leo Varadkar, with Eamon Ryan in terms of these key issues,” he added. “There will be challenges.”

The Taoiseach will also be speaking to the Ceann Comhairle on Monday to agree a date for the Dail to return, which is expected to be next week. –Additional reporting from PA

Life satisfaction lower during lockdown than economic crash, CSO study finds 11:29
Astronaut Chris Hadfield offers to ‘talk space’ with Adam from the Toy Show 11:10
Man dies after part of a building collapses in Tralee 10:57
Man arrested over murder of mother and her two children 10:02
Man in his 60s dies in Co Roscommon house fire 09:05