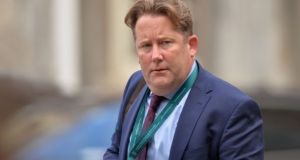 Housing minister Darragh O’Brien has said that the EU’s Trade Commissioner should resign after he attended a controversial golf event in the west of the country. Photograph: Alan Betson

Housing minister Darragh O’Brien has said that the Phil Hogan should resign after he attended a controversial golf event in the west of the country.

Pressure has been building on Mr Hogan to step down from the EU role since it emerged he attended the Oireachtas Golf Society event. On Monday, Mr O’Brien said that Mr Hogan should take responsibility for his actions.

The commissioner has also been urged to consider his position by the leaders of Ireland’s coalition Government, Micheal Martin and Leo Varadkar, after attending a dinner at a hotel in the west of Ireland with more than 80 people present.

Gardaí are investigating whether coronavirus regulations were broken in holding the Oireachtas’ golf society event two days after the Government announced it intended to curb the numbers permitted to gather together.

“That’s unhelpful to say the least. The commissioner needs to realise how rightly people are so angry about this event and his participation in it,” he added.

He urged Mr Hogan to look to Dara Calleary who resigned as Minister for Agriculture less than 48 hours after attending the event.

He also disputed claims that his removal from the high profile post would not be in Ireland’s interest because of Mr Hogan’s role in the Brexit negotiations.

“I think to pin all our hopes on one individual is simplistic,” Mr O’Brien added.

“I don’t really think that argument as a justification for the commissioner to stay on stand up. I understand the point that’s being made, but frankly our hopes and our strategy in relation to Brexit in the next few months are not just pinned on one individual.”

A resurgence in Covid-19 cases in recent weeks has led Ireland to backtrack on some of its measures reopening society after lockdown.

Mr Martin and his Tánaiste Leo Varadkar have asked Mr Hogan to consider his position.

An Irish Government statement said: “They both believe the event should never have been held, that the commissioner’s apology came late and that he still needs to give a full account and explanation of his actions.”

Mr Hogan has apologised for attending the event.

It has also emerged that Mr Hogan was stopped by Irish police while driving in Kildare on August 17th for using his mobile phone.

A spokesperson told RTÉ the incident happened while he was en route from Kilkenny to Kildare to collect personal belongings and essential documents at his apartment there before driving on to Galway for the golf event.

The spokesperson said: “The lockdown guidelines for Kildare provide for exceptional travel outside the county ‘to travel to work and home again’.”

It is EU Commission president Ursula von der Leyen who would have to force his resignation.

The leader of Ireland’s opposition Labour Party, Alan Kelly, said: “It is incumbent on Taoiseach Micheal Martin and Tanaiste Leo Varadkar to now inform the president of the European Commission Ursula von der Leyen that they no longer have confidence in the Irish commissioner Phil Hogan and that she should ask for his resignation pursuant to Article 17 of the Treaty on European Union.”

The article says a member of the commission shall resign if the president makes the request.

Trade is a central issue in the EU’s efforts to build agreement with the UK to mitigate any ill-effects from Brexit.

Meanwhile, Galway West TD Noel Grealish says he let his constituents, his family and his friends down after the Oireachtas Golf Society event in Clifden last week. The Independent Deputy says he now realises the hurt he caused by attending the dinner - which had over 80 guests made up of TDs.

As captain of the golf society, Deputy Grealish was one of the event organisers and signed the invitation, along with Donie Cassidy. He says the dinner should not have taken place and he will cooperate fully with any Garda investigation. This is the second statement Deputy Grealish has made after the event - with the first made on Friday. This second statement comes after a weekend of silence from him amid much public commentary