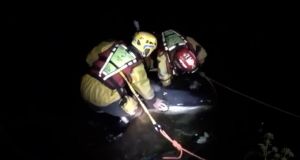 Fire crews in Cork city who last night rescued a trapped dolphin were disappointed this morning to find the dolphin had subsequently died.

The animal died after it again became caught in branches in Wandesford Quay on the River Lee.

Acting second officer with Cork city fire service, Victor Shine, told RTÉ’s News at One the crew had been pleased last night when they freed the dolphin and pointed him in the direction of open water.

DOLPHIN UPDATE: Unfortunately despite the fact that crews rescued this dolphin late last night and it swam off downstream, we can confirm that a dead dolphin has been found in the River this afternoon.@UCC zoology department assisting with the handling of the remains. ☹️ 🐬🚒

“At some stage in the night the dolphin made its way back to the same location where it was initially trapped, and it got trapped again. Its directional ability must have been affected in some way.

“This morning we recovered the dolphin and handed it over to the department of zoology in UCC.

“We’ve had a number of scenarios where different forms of sea life come up the river. There are a lot of fish this time of year, some times the creatures or mammals follow the fish and sadly on this occasion the dolphin came too far up river and became disorientated.

“People were very disappointed. The crew last night were ecstatic, unfortunately we would like to have seen it rescued and brought back to open water.”