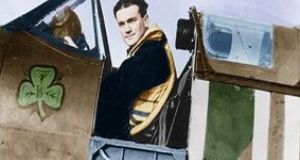 Brendan ‘Paddy’ Finucane in the cockpit of his plane.

The documentary about the son of a volunteer in the Easter Rising who went on to become a celebrated RAF ace in the second World War has premiered in Dublin.

Spitfire Paddy: The Ace with the Shamrock tells the story of Brendan ‘Paddy’ Finucane who became the youngest wing commander during the Battle of Britain in Second World War.

When he died, in July 1942 at the age of 21, Finucane had become an international celebrity.

His record of 32 downed enemy planes is the second highest tally in the list of RAF fighter aces.

His father, Andy Finucane, was a volunteer in the Easter Rising who does not appear in official documentation relating to the Rising and who later emigrated to Britain with his son.

Yet Andy Finucane surfaces in Finucane: Fighter Ace, the biography of his son written by Doug Stokes in the early 1980s, as having fought with Éamon de Valera, the architect of Irish neutrality in the second World War, in Boland’s Mill.

He also appears in an account from Ignatius Callender, the section leader of D Coy, 1st Battalion of the Irish Volunteers, this time as part of the Four Courts garrison.

“As I was about to leave Murnane’s, Andy Finucane, 2nd Lieutenant of D Company arrived. I was greatly relieved. I asked him for official instructions or orders, as my officer.”

The competing loyalties of father and son inspired Gerry Johnston, a 52-year veteran of the film industry to make Spitfire Paddy: the Ace with the Shamrock.

Johnston said he was drawn to the story by the intergenerational conflict in the family also the level of responsibilities Brendan Finucane had at such a young age.

The conflict stemmed from Brendan Finucane’s application form for the RAF which had to be signed by two guardians. Significantly, his father Andy had refused to sign it.

In later life Andy Finucane was assiduous in promoting his son’s memory, but the document gives a tantalising glimpse at his initial resistance to his son joining the British armed forces.

Brendan Finucane’s cousin, Brian Physick, who grew up with him in Dublin and Southampton, tells the story of his early life and the beginning of his career in Fighter Command.

Finucane’s nephew and his namesake, Brendan Finucane QC, is also interviewed in the documentary as is Leonie Elizabeth Watson, the younger sister of Paddy Finucane’s fiancé, Jean Woolford.

She discusses the relationship between the couple, showing the previously unseen scrapbook of photos and press-cuttings which are treasured by her family.

Another reason Johnston decided to make the documentary is as a response to the very modern preoccupation with celebrity and fame.

Brendan Finucane was educated at the Christian Brothers in Dublin’s O’Connell School. In two years from July 1940 when he first flew on operations until his death in July 1942, he became world famous.

He featured in Life magazine and in profile in the New York Times. The British press spoke of him as a successor to Douglas Bader, the war hero then in a German prisoner-of-war camp and later the subject of the film Reach for the Skies.

Churchill was so impressed by Finucane that he considered setting up a “shamrock wing” for the RAF.

After the war, he told the House of Commons that whenever he had bitter feelings about Irish neutrality “the hands of heroes like Finucane seem to stretch out to soothe them away”.

As Finucane shot down more and more German planes, or as they were known at the time “kills”, a word he detested, his fame grew.

The paparazzi besieged the family home in Richmond, west London hoping to glimpse him and his fiancée, Jean Woolford, who lived two doors down. “They were hounded. They were the Beckhams of their time,” says Mr Johnston.

He first heard about Brendan Finucane while making a documentary about the Irish Air Corps in 2012. Spitfire Paddy took four years to make and was mainly self-financed with funding from the Irish Aviation Authority (IAA).

He also built a scale model of Finucane’s Spitfire with the distinctive shamrock livery and then built a replica of the real thing, although this cannot fly.

He intends to use the replica in a feature film about Finucane he is planning. “I have a passion. I get too involved.”

It takes a degree of chutzpah to conceive of a feature film about an RAF pilot in the second World War. It hasn’t been attempted on such a scale since The Battle of Britain film in 1969 on which Johnston worked.

While prohibitive cost has deterred any repeat to date, Johnston, a special effects man all his life, believes it is now possible with CGI to recreate the key scenes required.

Nevertheless, he sees a minimum price tag of £20 million (€25 million) and €150 million if a top director is involved.

“I worked with Steven Spielberg, Ridley Scott and Mel Gibson before.” Would he conceive of a director of that calibre? “Yes,” he he says.

“I would like to direct it myself, but is somebody going to give me €20 million or €50 million?”

Johnston s believes Finucane deserves a bigger appreciation in his home country. “I think he was one of the greatest heroes to ever come out of Ireland or England, ” Johnston says.

“He is celebrated around the world except in Ireland. That’s going to change.”