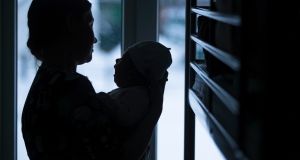 In this photo taken on Thursday, January 26, Veronica (the name she has given in order to protect her identity), a woman who has been beaten by her husband, holds her child in a shelter for women who suffered from domestic violence outside Moscow, Russia. The lower house of the Russian parliament has given final approval to a bill decriminalising some forms of domestic violence in a move that has sparked intense public debate. Photograph: Pavel Golovkin/AP

The lower house of the Russian parliament has given final approval to a bill decriminalising some forms of domestic violence.

The State Duma voted 380-3 to eliminate criminal liability for battery on family members which does not cause bodily harm, making it punishable by a fine or a 15-day arrest.

The law needs to be approved by the upper chamber and signed by president Vladimir Putin, who has signalled his support.

The bill has raised fears that it could mean impunity for those who beat up their family members, but its supporters have argued that it retains criminal responsibility for repeat offenders.

The measure is a response to conservative activists’ criticism of the current legislation, seen by some as a threat to parents who might spank their children.

If Mr Putin signs the measure into law, only injuries such as concussions or broken bones, or repeated offences committed in a family setting, would lead to criminal charges.

Defenders of the measure say it will protect parents’ rights to discipline their children and generally reduce the state’s role in domestic life.

“In the traditional Russian family culture, relations between ‘fathers and sons’ are built upon the authority of parents’ power, mutual love and personal indispensability as the basis for children’s upbringing,” said Yelena Mizulina, one of the initiators of the new legislation and author of a law that banned “gay propaganda” aimed at minors.

Opponents called it a step back to medieval times and a licence for violent behaviour by domestic tyrants.