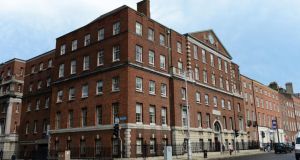 A dispute over the timing of a request for blood units has arisen at the inquest into the death of a woman who suffered major blood loss following an emergency Caesarean section and was left waiting almost 40 minutes for a transfusion.

Nora Hyland (31), a Malaysian woman living at Charlotte Quay in Dublin 4, died on the operating table on February 13th, 2012, within three hours of undergoing the C-section at the National Maternity Hospital, Holles Street.

She suffered a cardiac event an hour after her son Frederick was successfully delivered.

At a previous sitting, Dublin Coroner’s Court heard that there was a 37-minute delay between the time her treating physician requested blood for transfusion and the units being administered.

Dr Nikhil Purandare, then specialist obstetrics registrar at the hospital, said he put in the request for the units at 12.03am, after finding Ms Hyland had lost approximately one litre of blood.

Bleeding
However, the units were not administered until 12.40am, while Ms Hyland was undergoing a laparotomy to stop the bleeding, with her total blood loss estimated at 3.5 litres following that procedure.

Anaesthetists used non-oxygen-carrying gelafusine to maintain her blood volume while waiting for the units to arrive.

At the resumption of the inquest yesterday, a dispute arose over when the initial request for blood units was made by Dr Purandare.

Staff nurse Aoife Lennon said she had attended the C-section and then shown Ms Hyland’s husband Stephen out of the operating theatre after bringing him to see the baby, who was being cared for by the paediatrician on call.

Blood request
She told the court she returned to the operating theatre at 12.10am, and it was then Dr Purandare requested two units of O-negative blood – the universal blood group – to be delivered immediately, as well as further red blood cells specific to Ms Hyland’s type.

The inquest had earlier heard that an emergency supply of O-negative blood was not kept in the operating theatre at the time.

Ms Lennon said she called the lab to order the blood products at 12.11am and gave the porter a collection docket at 12.13am. She was told the O-negative blood would be available in 10 minutes.

She subsequently was told it would be a “further five minutes”, at which point she stressed the urgency of the situation. The blood left the lab at 12.31am, she told the court.

The pathologist who oversaw the postmortem, Dr David Gibbons, told the court Ms Hyland’s heart was normal. He said he could not prove there was a link between the blood loss and the cardiac arrest.

However, when asked if, on the balance of probabilities, the cause of death was the post-birth bleeding leading to heart failure, he said yes.

The inquest was adjourned to hear further evidence on March 7th. The master of Holles Street, Dr Rhona Mahony, is among the witnesses expected to give evidence when the inquest continues.