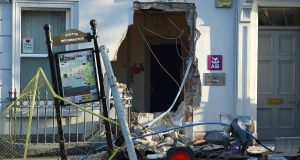 The scene in Castleblayney, Co Monaghan, where a digger was used to pull a cash machine from a wall during a theft. Photograph: Philip Fitzpatrick

Gardaí are investigating the theft of an ATM on main street in Castleblaney, Co Monaghan, in the early hours of Wednesday morning.

The cash machine was removed from the wall of a building by a digger at approximately 3am, the Garda press office said.

It was then loaded onto a trailer being towed by a dark coloured jeep, which left in the direction of the Oram road.

The theft of ATMs, often using heavy industrial equipment to extract the machines, has become increasingly common in the Border region. In the past year there have been 11 such thefts on either side of the border, with seven being carried out in Northern Ireland since the start of the year.

Estimates of the amount taken across the robberies are in the tens of thousands.