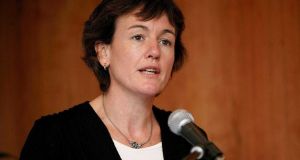 Dr Gráinne Flannelly: says she warned officials, in the hours before the Government announced the plan, that it would have consequences. Photograph: Julien Behal/PA

The former clinical director of CervicalCheck has said the Government decided to offer women free out-of-cycle smear tests despite concerns raised by her in the hours before the decision was made.

Gráinne Flannelly warned senior officials in the HSE not to offer free out-of-cycle repeat smears to women because it would “fundamentally undermine the screening programme”, it has emerged.

The information is contained in a new document written by the former director, who stepped down on April 28th, 2018, in the immediate aftermath of the smear test scandal.

She said she passed on a number of serious concerns to a senior official in the HSE who then spoke to an unnamed official in the Department of Health. The decision was made to proceed “in any case” shortly after.

The document has been sent to the health committee.

Minister for Health Simon Harris has said he was not advised against offering the tests before he made his decision. He also told Fianna Fáil leader Micheál Martin, “neither I nor my officials received advice that recommended against these tests in advance of the decision”.

Almost 80,000 women are waiting up to 33 weeks to receive their results after a surge in demand following the announcement last year.

Dr Flannelly said she attended a meeting with Dr Jerome Coffey, Dr Colm Henry and the head of screening, Mr Charles O’Hanlon, at the offices of the National Screening Service at lunchtime on Saturday April 28th, 2018.

After the meeting, Mr O’Hanlon confirmed he had been contacted by the Department of Health to discuss a proposal to facilitate a repeat test for any woman concerned about the result of her screening test.

Dr Flannelly said she immediately told an official that the plan would have consequences. The first was that “general practitioners would not be able to be paid for this service as there was no mechanism for payment of out-of-programme tests”.

Furthermore, laboratories would not have sufficient capacity, she said.

“CervicalCheck had contracted for on average 250,000 tests per year. Open access for repeat testing would be difficult to plan for and difficult to deliver sufficient capacity to avoid longer waiting times for results.”

Most importantly, she said, the idea would “fundamentally undermine the screening programme”.

She said a follow-up discussion happened within the hour, at which she was told that the decision was to proceed regardless.

“At a follow-up discussion, within the hour, Mr O’Hanlon reported that when he contacted the DoH, the response was the decision was to proceed with this policy change in any case. No further explanation was forthcoming.

“The announcement was made later that afternoon.”

Later that evening she stepped aside as clinical director. as a result of the ongoing fallout over the smear test controversy.

“I have no knowledge of any subsequent discussions between the NSS, HSE and the DoH regarding this decision,” she says.