Derry woman puts her finger on a bizarre Brexit anomaly 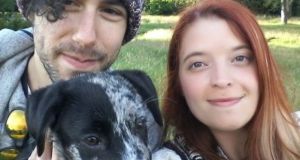 Ms de Souza insists that she has never been British, a status that she can therefore not reject. Above, Emma DeSouza and her husband, Jake. Photograph: Emma DeSouza

Emma de Souza has put her finger on a serious and bizarre anomaly that even British prime minister Theresa May acknowledges.

Her battle through the British courts is exposing what she and human rights campaigners see as a significant flaw in the implementation of the Belfast Agreement and now, as a consequence, in the Brexit Withdrawal Agreement which is supposed to have taken on its obligations.

At issue is the meaning of the birthright provision of the Belfast Agreement – the right of Northern Ireland citizens to be recognised as British, Irish, or both. Human rights campaigners such as the Campaign on the Administration of Justice (CAJ) complain that the Brexit agreement protocol on the North only partially honours the undertakings given by the UK to uphold the Belfast Agreement.

Prof Colin Harvey of Queen’s law school in Belfast said the birthright provisions set out in the Belfast Agreement were not well understood. “In a real sense people were promised something that has not been delivered,” he said. “They are absolutely right to want the rights [enumerated in the agreement] copper-fastened.”

Ms de Souza, a Derry woman, wants to exercise a European Union right to bring American-born husband, Jake, to live with her in Derry. British law makes that difficult, but by insisting on her right under the Belfast Agreement to Irish citizenship she has sought to avail of the more liberal provisions of EU freedom of movement law.

She has been told by the Home Office that as a British national she must go through the standard complex procedure for approving third-country family reunions – or, to avoid this and use her Irish citizenship, she can renounce her British nationality.

Ms de Souza insists that she has never been British, a status that she can therefore not reject. And her claim against the Home Office’s automatic presumption of her Britishness – because she was born in Northern Ireland – was upheld by a Belfast tribunal last week. “The British and Irish Governments recognised the birthright of all the people of Northern Ireland to identify themselves as Irish or British, or both,” said Judge Gillespie in his decision. The Home Office will be appealing.

But her case was acknowledged by Theresa May in her visit to Belfast last week. “In some cases recently, some people have encountered difficulties in securing their rights as Irish citizens to bring in family members . . .” the prime minister said, ordering a review of the case by the home secretary “to deliver a long-term solution consistent with the letter and spirit of the Belfast Agreement”.

The Home Office and the Office of the Northern Ireland Secretary have refused to clarify the nature of the proposed review, but Mrs May has also been wooing Labour MPs with assurances that the government will guarantee to maintain EU labour, environmental and human rights standards post-Brexit.

The anomaly being highlighted by Ms De Souza is not unique, according to the CAJ. It warns that Irish citizens born in Northern Ireland who, in the hope of safeguarding EU citizenship rights like that to free movement, wish to apply for the Settled Status scheme – the programme for registering migrants from the EU post-Brexit – are being warned that they cannot apply since they are dual citizens born as British. And so, by default, regarded as British by the Home Office.

The Settlement Scheme, which is to be compulsory for other EU nationals, is connected to the citizens’ rights chapter of the Withdrawal Agreement, and permits those who successfully apply to retain a range of EU rights.

Daniel Holder of the CAJ told the Irish World that the Home Office’s position means Irish citizens in the North “may be among the only EU citizens not to have a mechanism to retain some of their EU rights” after Brexit. Only Irish citizens who are not also British citizens, he said, would be able to apply under the Settlement Scheme for long-term protection of their EU rights following Brexit.

But officials in Brussels caution that the rights to be retained post-Brexit by EU citizens living in the UK are limited.

There was, they said, confusion about the distinction between EU rights – those enshrined in the treaties like free movement – and EU benefits, like the right to reunite families or EU health insurance cards, which arise from EU legislation. The latter are not protected in the Withdrawal Agreement.

Irish and EU officials say these are worth protecting, and they would like to do so, but need to be negotiated separately. Irish citizens in Northern Ireland who are covered by the Withdrawal Agreement will continue to benefit from it after withdrawal. This is, however, not an EU citizenship right, but the result of co-ordination of social security systems. Bilateral arrangements between Ireland and the UK may continue to apply for those not covered by the Withdrawal Agreement. Bilateral arrangements may also ensure future family reunion and arrangements for tuition fees.

Emma de Souza’s birthright is not all it appeared to be.