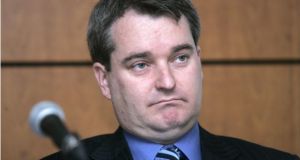 Robert Watt, secretary general of the Department of Public Expenditure and Reform, said he had been asked to appear before four Dáil committees in connection with the children’s hospital. File photograph: Dara Mac Dónaill

Robert Watt, the senior civil servant who heads the Department of Public Expenditure and Reform, has told the Public Accounts Committee that he is willing to attend the committee to answer questions about the oversight of capital expenditure.

Mr Watt had previously been criticised by TDs, including the Government chief whip, for turning down a request to appear at the Oireachtas health committee to discuss the overspend at the children’s hospital.

In a letter today to the chairman of the Public Accounts Committee, the Fianna Fail TD Sean Fleming, Mr Watt notes that he has been invited to attend four different Oireachtas committees to discuss the children’s hospital – the PAC, the Budgetary Oversight Committee, the Health Committee and the Finance Committee.

“I wish to be helpful in terms of setting out for the Committee of Public Accounts the role of my department in relation to general capital expenditure,” Mr Watt writes, offering to attend a meeting on March 7th, or shortly thereafter.

He asks that Mr Fleming confirm with the chairs of the other committees that the PAC is the committee to which he should make himself available.

While Mr Watt is not the accounting officer for the children’s hospital project, his department oversees the state’s capital programme.