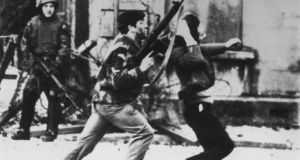 The Northern Ireland Public Prosecution Service is to announce next month whether British soldiers will face charges over the 1972 Bloody Sunday killings, it has been confirmed.

Decisions on whether 17 former British soldiers and two alleged former members of the Official IRA will be prosecuted will be announced on March 14th, the Bloody Sunday families have been told by the prosecution service.

The potential charges include murder, attempted murder and perjury, it is understood.

The PSNI began several murder investigations after the 2010 Saville report into Bloody Sunday found that those killed and injured during a civil rights demonstration on January 30th, 1972, were innocent. Members of the British parachute regiment were mainly responsible for the shootings.

Thirteen unarmed civilians were killed on the day, while a 14th victim died some months later. Fourteen people were injured.

Since then, five of the former soldiers have died. The prosecution service must decide whether or not the 17 former soldiers, most aged in their 60s and 70s, and two former Official IRA members will be prosecuted.

Whatever the decision, it is likely to lead to controversy and protests. A number of the Bloody Sunday families have been demanding that former soldiers face murder charges, while British army veterans’ representatives and many MPs have claimed there is a “witch hunt” against former soldiers.

Many have called for a statute of limitations to be introduced so that former soldiers will not be charged.

After Saville published his report, then British prime minister David Cameron issued a public apology and said the killings were “unjustified and unjustifiable”. He said, “You do not defend the British army by defending the indefensible.”

Under current legislation, if any of the former soldiers or alleged former Official IRA members were convicted and imprisoned, they could not avail of the early-release scheme of the Belfast Agreement, under which they would serve a maximum of two years. That scheme applies from 1973 until the April 1998 signing of the agreement.

There have also been claims that even if the early-release scheme were backdated to include the Bloody Sunday period, it would not apply to former British soldiers.

Daniel Holder of Belfast-based civil liberties group the Committee on the Administration of Justice, said on Thursday there was absolutely no reason why it could not apply to former British soldiers.

“Despite popular myth, the early-release scheme can be applied to members of the security forces,” he said.

The former Official IRA members, it is understood, face possible charges over shots that were fired at soldiers after the Bloody Sunday shootings.