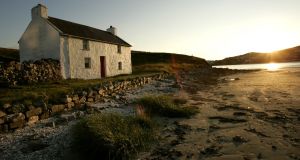 A proposal has been advanced that would involve building a housing estate in an area like Knocknacarra – formerly a gaeltacht – to accommodate families who use Irish daily. Photograph: The Irish Times

One of the last fluent native speakers in the Galway city Gaeltacht of Mionlach believes that Irish has just 10 years left as a community language.

Landscape gardener Pádraig Ó Fathaigh (57) is already the subject of linguistic research, as the youngest speaker retaining complete fluency in his home village of Mionlach or Menlo.

He takes no pleasure in witnessing what he describes as the “death of a Gaeltacht that I grew up in” due to lack of State commitment to Irish and the inseparable dominant influences of urbanisation and anglicisation.

Lying within the Galway city boundary and overlooking the river Corrib, Mionlach has its own distinct Irish dialect which has been recorded by Brian Ó Curnáin, assistant professor in Celtic studies at the Dublin Institute for Advanced Studies.

Prof Ó Curnáin, who has spent 15 years studying the fortunes of the first language in east Galway, said these speakers were known as “lachaín Mhionlaigh” or the “ducks of Menlo”.

This was either due to their proximity to the river Corrib or to the rapid nature of their Irish speech – and he believes it was more likely the latter.

Both Mionlach and the Claregalway community of Móinteach have been the strongest pockets of Irish surviving in east Galway, he said.

“There is no Irish spoken in the village of Carnmore, for instance, and there was when I started this research. If you think that the last full native speakers were born before the 1960s, then there is less and less traditional Irish in what were relatively strong Gaeltacht areas,” he said.

Recording native speakers is imperative, he said, given the rate of decline of the language.

“You can listen to the Iliad in Greek or Beowulf in old English on the internet, but there is hardly anyone left who can read old Irish,” he added.

Prof Ó Curnáin takes issue with what he describes as an “ignoriat”, reflected in elements of academia, the media, State administration and politics, which ignores a “series of detailed and high-quality research” showing evidence of the death of the language in the Gaeltacht.

“One of the most unfortunate results of their denial is the deflection from ameliorative interventions and language planning such as the “New Deal for Irish and the Gaeltacht”, proposed by Prof Conchúr Ó Giollagáin,” he said.

Prof Ó Giollagáin, Soillse research professor in the University of the Highlands and Islands, Scotland, outlined his proposals for such a “new deal” in this newspaper last June.

He proposed re-establishing communities with sufficient density of Irish speakers to ensure Gaeltacht sustainability; and establishing a form of civic trust to manage socio-economic resources for the benefit of the minority group.

He also proposed establishing a Dáil na nGael or assembly to allow for the development of Irish language civil culture and to provide group leadership; and provision of research and productive strategic back-up for the Irish-speaking community.

Sinn Féin Cllr Cathal Ó Conchúir received unanimous support for his proposal, as an amendment to the plan, last week. Its feasability is to be investigated further by the local authority.

It would involve building a housing estate in an area like Knocknacarra – formerly a gaeltacht – to accommodate families who use Irish daily.

Mr Ó Fathaigh, who speaks Irish to his 96-year-old aunt Nell Ní Chaserlaigh in Mionlach, said he would love to see such a project initiated as he believes that gaelscoileanna are “no substitute for community language”.

He also believes there is a sense of shame attached to Irish, and a belief by Irish speakers that they must defer to English speakers who might not otherwise understand them.

“I heard a man once say that ‘if we are too polite to speak Irish, we will polite it to death’, and I am inclined to agree,” he said.