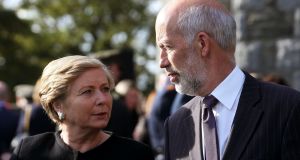 Former Alliance leader David Ford in conversation with Tánaiste Frances Fitzgerald. Mr Ford is considering his role within his Presbyterian congregation after being dismissed as an elder. File photograph: Brian Lawless/PA

Former Alliance leader David Ford is considering whether he can remain within his local Presbyterian congregation after he was ousted as an elder of Second Donegore Church due to his support for same-sex marriage.

On Sunday Mr Ford and his wife Anne attended the regular service in the Co Antrim church to hear it formally confirmed that he had been dismissed as a church elder.

Mr Ford in 2013 temporarily stood down as a ruling elder of his local Presbyterian church, which is also known as Dunamuggy, due to local opposition to his support for same sex marriage.

This prompted a judicial process within the Presbyterian Church with its highest ruling court, its judicial commission, ultimately deciding that “Mr Ford had placed himself in a position where it had simply become impossible for him to satisfactorily discharge his duties as a ruling elder in Second Donegore due to a breakdown in relationships between him and the other members of the Kirk Session”.

While the commission found he could no longer be an elder in Second Donegore , he remained “an elder without charge in good standing of the Presbyterian Church in Ireland”.

This means he could be an elder in other Presbyterian churches.

Mr Ford has not made clear whether in the wake of the ruling he will remain in his local church or indeed in the Presbyterian Church. “It remains to be seen whether or not I have any role in Dunamuggy,” said Mr Ford.

It is understood that other Protestant denominations have offered him membership within their congregations, notwithstanding his support for gay marriage.

Mr Ford, who stood down as Alliance leader earlier this month, has been a church elder for almost 30 years, while his family has attended Second Donegore for generations.

He pointed to other problems within Second Donegore. He said that “unusually” the judicial commission was critical of the way the local church dealt with him and that it “directed Presbytery to address other issues of concern in Second Donegore as soon as possible”.

“It is a matter of great sadness to Anne and me that both Presbytery and Session have failed to act to promote healing and unity within our church, despite repeated requests from us over the last nine months. I believed that, as an elder, I had a part to play in making our congregation fit for purpose,” he said.

Mr Ford is no stranger to controversy in relation to social issues. On Wednesday he submitted a private member’s Bill at Stormont seeking to make abortion available in Northern Ireland in cases of fatal foetal abnormality.

“This is not about disability, it is solely concerned with situations where a foetus cannot survive,” he said. “We need to help the women who wish to seek a termination in these circumstances and we need to help them now.”

East Belfast Assembly member Naomi Long, who seems certain to be formally ratified as Alliance leader next week, criticised the decision to remove Mr Ford as a church elder.

“As a fellow Presbyterian and someone who believes passionately in freedom of and freedom from religion, who supports the separation of church and state, and who supports equal civil marriage because of my faith, not in spite of it, this is a very sad day for the church and a very painful day for many of us who support David Ford’s position,” she said.

“His faith is clear to anyone who knows him, a man of principle who respects those who hold different views: that others cannot be so gracious or show humility in disagreement is regrettable to say the least.”