Dara Calleary given Gaeltacht responsibility after controversy over Cabinet snub 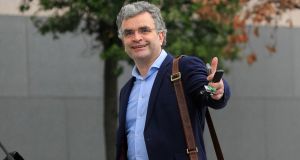 Mayo Fianna Fáil TD and Government Chief Whip Dara Calleary has been appointed as Minister of State for the Gaeltacht, the Irish language and Sport.

The appointment was welcomed in a statement issued late on Wednesday by the Green Party deputy leader Catherine Martin, the newly appointed Minister for Media, Tourism, Arts, Culture, Sport and the Gaeltacht.

Ms Martin said Dara Calleary has displayed “a particular interest in the language and in the development of the Gaeltacht” throughout his years as Teachta Dála, and has “a great understanding” of the challenges facing Gaeltacht communities and the Irish language community.

She said his role as Government chief whip “will ensure special status for the Gaeltacht and the language around the Cabinet table”.

She added the appointment will expedite the implementation of the 20-Year Strategy for the Irish language “in the community and across the State sector”.

Mr Calleary, who is also deputy leader of Fianna Fáil and who previously held the role of party spokesperson on the Gaeltacht, said he was looking forward to taking on the role.

“The Government acknowledges the importance of the Irish language as the first language of the State, as a living language, and as a vital component of the heritage of this island,” he said.

“We are determined to increase not just the visibility of our native language but also it’s daily use within the community. I feel passionately about the protection and preservation of Gaeltacht areas to ensure they remain at the heart of a living language.”

However, it pointed out that it was looking forward to working with ministers Martin and Calleary, both of whom speak Irish and have an understanding of issues facing the Gaeltacht.

Minister Martin is expected to take a closer interest in Gaeltacht and Irish language affairs than some of her predecessors. She has previously spoken out in the Dáil on language rights, on the need for greater investment in Irish language services and on the significant challenges faced by Gaeltacht communities.

She said last night she intends to visit a Gaeltacht area with the Minister of State “without delay”.

One of the first issues they are likely to face is a growing controversy surrounding a planning decision by An Bord Pleanála to grant permission for a major housing and hotel development in the centre of the Co Meath Gaeltacht village of Ráth Chairn.

The decision was made despite local concerns that a development of its size would result in Irish no longer being the majority spoken language in the area, something which would effectively spell the end of the Gaeltacht.

Other issues the ministers will have to tackle include addressing what many in Irish language circles see as a significant power imbalance at the core of Irish language policy implementation.

Persistent underfunding of Gaeltacht areas, a decline in the numbers of speakers in those areas, a crisis in the provision of Irish-medium education from early years through to third-level and the inability of the State to provide equality of access to Irish speakers are seen as some of the key issues the new department will have to contend with.

It will demand an understanding not just of the scale of language loss and of the pace at which it is happening but also its implication for wider Irish society, an understanding of the merits in tackling it, and the need for a transformative cross-department approach to do so.