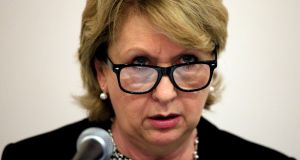 Former president Dr Mary McAleese has called for leading 19th-century Irish politician Daniel O’Connell to be honoured at the British Houses of Parliament for his role in campaigning for egalitarianism and religious tolerance.

Speaking at the Daniel O’Connell Summer School in Cahersiveen in Co Kerry, Dr McAleese said that O’Connell had left many legacies, including his involvement in the campaign for the abolition of slavery.

She said that, despite this, O’Connell, who served in the House of Commons from 1828 to 1841, has not been recognised with any monument or plaque in Westminster and that that is something which should be rectified.

“I think of the respect O’Connell ought to be held in by the Westminster Parliament because he introduced to an imperial colonial parliament, driven by elitism, the values of egalitarianism, the dignity of every human being, of democracy, at a time when these were only embryonic concepts.

“O’Connell was the Mandela of his day and I have to say it really bothers me today walking through Westminster to know that there is no picture, no monument, no statue, no bust of O’Connell.”

Speaking in a question and answer session with Frank Lewis of Radio Kerry, Dr McAleese said that she found great guidance in O’Connell’s political philosophy while growing up in Northern Ireland during the 1970s, when sectarian conflict was rife,

She recalled her visit to O’Connell’s home at Derrynane with her husband Martin while on their honeymoon and how it was a sort of pilgrimage for them both.

Dr McAleese said: “When O’Connell died, you could say he had failed in terms of reconciling the violent and the constitutional traditions . . . but with the Hume-Adams initiative we get to see what a visionary ambition O’Connell had for us as a people.”