Damage to crannóg in Roscommon being investigated

Department confirms increase in unauthorised use of metal detectors 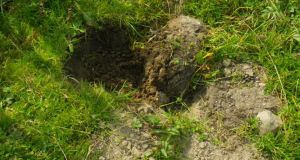 The crannóg close to Roscommon Castle which was damaged in several places and reported to gardaí. A local heritage group believes a metal detector and knife were being used illegally at the protected site. Photograph: Frank Scott

Gardaí are investigating damage to a crannóg near Roscommon Castle which may be linked to unauthorised use of metal detectors. The Department of Arts, Heritage and the Gaeltacht and the National Museum of Ireland say they are also “aware of reports of potentially unauthorised metal detection activity” at the crannóg.

The department has said that a National Monuments Service archaeologist will “visit the site shortly and will advise if any further action is necessary”.

Roscommon Heritage Group activist Frank Scott said the damage involved a series of holes dug across the site, which may date back to the sixth century.

The crannóg, or artificial island dwelling, is believed to have been built by the O’Connor clan. It is located on what was once a permanent lake, known as Loch na nÉan, or the lake of the birds. A knife which had been left behind is now in the possession of gardaí in Roscommon who are investigating.

“This crannóg has never been excavated by the State, and it not easy to get to, but it is an attraction for people using metal detectors illegally,” Mr Scott said.

In contrast to Britain, the activity is not authorised here unless under licence as part of approved archaeological work.

Mr Scott said there may be a lack of awareness of the legal situation among visitors, particularly from Britain. British legislation allows for use of such devices with permission of a landowner, and a reward for any find is split between the finder and the landowner.

Last year, then minister for arts and heritage Jimmy Deenihan published new public guidelines on the use of the devices. The department said this was in response to growing numbers of reports being received by the department and the National Museum of “increasing levels of the illegal use of metal detectors, often on important archaeological sites, and evidence from internet sites and elsewhere of the export and sale of unlawfully retrieved archaeological objects”.

“The guidelines set out to clear up any confusion that may be leading to unintentional breaches of the law, to provide individuals and groups with a clear statement of the law surrounding metal detecting and archaeological finds and to spell out the consequences of contravening the law,” the department said.

“The guidelines also alert the public of the potential damage that can be caused to archaeological heritage by random unauthorised metal detecting,”it added.