Cyclist in Dublin Bus crash: ‘I was extremely lucky’ 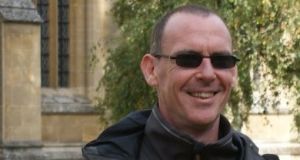 Bill Murphy: ‘I looked around and saw the bus was coming towards me so I rolled to the side. Thankfully there wasn’t a car or bus coming up inside the lane that turns left along the quays.’

Bill Murphy was close to the end of his daily 50-minute cycle to work when he pulled in at the red traffic lights at the top of Westmoreland Street at around 7.40am on Monday.

As he waited for the signal at O’Connell Bridge to turn green, he was suddenly hit with force from behind.

“I went up and then hit the deck, looked around and saw the Dublin Bus was coming towards me so I rolled to the side,” Mr Murphy (49) told The Irish Times. “Thankfully there wasn’t a car or bus coming up inside the lane that turns left along the quays.”

As he rolled away, Mr Murphy caught a glimpse inside the bus of the driver slumped over the driving wheel.

He also realised the bike he had been using seconds before was now caught beneath the bus which was still rolling across the intersection towards O’Connell Bridge. A few seconds later the bus came to a stop, and a man pulled the emergency lever and jumped on board.

Inside the bus Aoife McGivney, a nurse from Ballinteer, had just succeeded in removing the driver’s foot from the accelerator. The bus driver was then carried out onto the street where Ms McGivney administered CPR until the ambulance crew arrived. She would later describe how the man stopped breathing and went into cardiac arrest while lying on the pavement.

Mr Murphy stood nearby and a pedestrian handed him his badly damaged bike. A number of people approached him to ask if he was all right and some offered to be witnesses to what happened.

I’ve been cycling in Dublin since 1993. I’ve never really had a problem before

“I don’t really remember what happened to the bike. It definitely got caught under the front. All I can remember is the back wheel was mangled.

“I was probably in shock. The ambulance drivers recommended I go to the Mater Hospital for a check but thankfully I just had a little cut.”

Mr Murphy went home straight after the hospital check-up. “I’m fine now, I was extremely lucky. It was just one of those things, it was absolutely nobody’s fault.”

The Waterford native is planning to get back out cycling on the streets of Dublin as soon as possible. “I miss it already. I’ve been cycling in Dublin since 1993. I’ve never really had a problem before but I have noticed in the past few years that it’s definitely become worse. But I’ll be back up as soon as I can.”