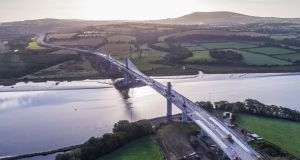 Delivery of Ireland’s longest bridge has been delayed by several weeks due to crumbling concrete which was detected at one of the supporting piers for the structure, The Irish Times has learned.

The problem, which was detected over the summer and has since been remedied, is thought to have been caused by voids within the pier which occurred during the high-pressure blasting of concrete during construction.

The 887m Rose Fitzgerald Kennedy bridge, which crosses the river Barrow between Wexford and Kilkenny, forms part of upgrades to the €230 million New Ross bypass.

A spokesman for Wexford County Council said “there was an issue with one of the 11 pier supports at the interface where the pier meets the underside of the bridge deck”.

The spokesman said the matter was identified as part of a works monitoring regime and corrective action was successfully undertaken. While remediation work did not stop main construction work from progressing, the spokesman said that fixing the issue had led to a delay of “weeks, not months”.

The council argued that “non-conformances of this nature are not untypical on a structure of this complexity”.

The project is a public-private partnership (PPP) with a joint venture of BAM Civil Construction and Spanish builder Dragados responsible for construction. A spokesman for BAM said the company was contractually precluded from discussing the project.

The bridge was initially scheduled to open early this year, but construction complexities unrelated to the issue around the piers have led to delays. It is thought the bridge is now likely to open towards the end of this year or early next year.

Challenging weather conditions during the winter may present another hurdle to completion of the project, Wexford County Council said in a statement.

“Wexford County Council remains hopeful that the project will open before the end of the year, but also recognises that the timeline is challenging and is subject to an ongoing review. We are conscious that there is a growing anticipation of the opening and that a lot of people in the New Ross area and beyond have waited a long time to see this project come to fruition.”

The bridge, which is one of the longest of its construction type in the world, is named after the mother of former US president John F Kennedy, whose ancestors came from the New Ross area.

“The project stakeholders are working to ensure that the project is completed safely and opened at the earliest opportunity to realise the benefits that the project will brign to New Ross and the wider region,” the spokesman added.