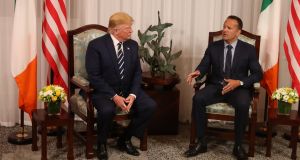 Leo Varadkar has been named by the New York Times in a list of world leaders who have used Donald Trump’s “fake news” trope to undermine journalism.

The news organisation’s publisher, AG Sulzberger, outlines in an opinion piece – titled “The growing threat to journalism around the world” and printed in Tuesday’s newspaper – how he believes the US president has given other leaders the vocabulary with which to criticise their media.

“My colleagues and I recently researched the spread of the phrase ‘fake news,’ and what we found is deeply alarming: In the past few years, more than 50 prime ministers, presidents and other government leaders across five continents have used the term ‘fake news’ to justify varying levels of anti-press activity.”

Mr Varadkar’s use of the “fake news” phrase to combat criticism has been well catalogued. In April 2018, when asked in the Dáil by Green Party leader Eamon Ryan about a reported row in Cabinet over judicial appointments, the Taoiseach said: “This is more fake news, I’m afraid. This time it was in The Irish Times, it was the Irish Examiner earlier on in the week... There has been a lot of fake news on the front pages this week.”

In July of last year, the Taoiseach became embroiled in controversy after he told a private lunch gathering in New York that he sympathised with Mr Trump’s view of the media, saying the media was not interested in the truth but in the story. He also claimed some investigative journalism in Ireland was incorrect, singling out RTÉ in particular for criticism.

Earlier this month, when asked whether increases in the costs of the national children’s hospital would affect other State capital projects, Mr Varadkar said claims they would be cancelled are “scaremongering” and “fake” news as there is “plenty of money for projects around the country”.

Asked in New York about the piece, Mr Varadkar said he hadn’t seen the article but said: “Any time that I’ve referred to fake news - and it wouldn’t be regular - what I mean is news that isn’t true. Unfortunately, it is the case that from time to time, news is reported as news and it turns out not to be true or not to be the full truth. Perhaps it’s not a good term to use, because of its association with President Trump who has a different agenda.”