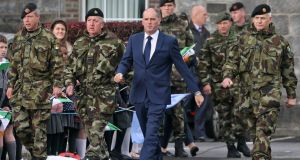 The Chief of Staff of the Defence Forces has warned military officers frustrated with the current recruitment and retention crisis about engaging in “anonymous personal attacks” on politicians or officials.

Vice-Admiral Mark Mellett said such attacks were not compatible with the core values of defence force officers.

Criticism by defence forces personnel of Paul Kehoe, the Minister of State for Defence, has increased markedly in recent months. It has been driven by a widely-held perception he is not doing enough to stem the degradation of Defence Forces numbers.

A number of anonymous social media accounts highly critical of Mr Kehoe and his handling of the Defence Forces retention crisis have been set up.

Last week a suit was hung up outside Mr Kehoe’s constituency office in Wexford, an apparent reference to a common allegation from some Defence Forces personnel that the minister is “an empty suit.” Photographs of the stunt circulated on military WhatsApp groups to the annoyance of senior officers.

Addressing the biennial conference of the Representative Association for Commissioned Officers (Raco) in Kildare Vice Admiral Mellett invoked the memory of former Irish military leaders Michael Collins and Richard Mulcahy, and appealed for optimism despite the current problems.

These leaders “did not resort to pessimism or negativity, and neither should we,” he said.

However Vice-Admiral Mellett conceded the retention crisis would get worse before it got better.

Separately Mr Kehoe told the Dáil on Tuesday that the Department of Defence had paid out €24 million less on pay for members of the Defence forces so far this year than originally envisaged due to the numbers on the payroll falling short of expectations.

Mr Kehoe insisted that money saved on pay would be re-invested in the military on capital projects such as new ships or aircraft as well as to fund Army pensions.

Mr Kehoe maintained that while the Defence Forces had to compete for staff in a buoyant economy at almost full employment, the 9,500 figure could be achieved.

Vice-Admiral Mellett said his biggest concern was the large numbers of trained personnel leaving the Defence Forces. “It is critically important people feel valued in the organisation,” he told reporters.

He said he believed the “full and timely implementation” of the Government’s plan to put in place the recommendations of the Pay Commission report on recruitment and retention in the Defence Forces would be key to addressing these problems.

“I am however a realist and recognise the challenges are likely to increase before things get better.”

The Chief of Staff told Raco delegates he believed the affiliation of representative bodies with the Irish Congress of Trade Unions (Ictu) , as is being sought by by Pdforra,the organisation representing enlisted personnel, could have implications for national security as it could reduce the capacity of the military to serve the Government.

There is concern among senior officers and Department of Defence officials that affiliation could lead in time to the military taking industrial action.

“Clearly the taking of industrial action of any kind is incompatible with military service,” Vice-Admiral Mellett said. “We do not have a union, we will never withdraw service and we are subject to military law.”

Mr Kehoe also said that he would not be rushed into making a decision on whether to approve Pdforra’s bid to to affiliate with Ictu and was awaiting a report from officials. He said the Government would have to take account of the risk that the move could impinge on the military chain of command.

Separately the Minister has declined to say when the Naval Service flagship LÉ Eithne and the smaller LÉ Orla will return to service.

The two ships were put into “operational pause” last June after Flag Officer Commanding the Naval Service, Commander Michael Malone, said the service must cut its cloth to measure in terms of manpower.

“The ships are in operational pause and will continue to be so but I’m waiting on a set of proposals from the Naval Service to address some of the challenges that we have,” Mr Kehoe said when asked if the ships will ever return to service.