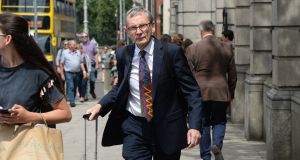 Dr Gabriel Scally said it was a ‘scandal’ that the opportunity to tackle the virus was not properly taken during the summer. Photograph: Dara Mac Dónaill

The Covid-19 death rate in Northern Ireland since the second wave of the virus is running at four times that of the rate in the Republic, according to official figures from both jurisdictions.

Since the Northern Executive imposed a four-week lockdown on October 16th, there have been 183 coronavirus deaths in Northern Ireland up to Monday, November 9th, based on figures published by the North’s health department.

Over that same period up until Monday, based on official Government figures, there have been 107 Covid deaths in the Republic.

The population in the North is roughly two-fifths that in the South. Were the populations the same and based on the Northern death rate the death figure in the North would be about 450 deaths – more than four times that of the Republic.

The population in the North is older than in the Republic but this is only one factor and the figures do point to a much higher death rate in Northern Ireland, according to Dr Gabriel Scally, president of epidemiology and public health at the Royal Society of Medicine in London

“The age difference does not explain the full differential in deaths,” he said on Tuesday.

Dr Scally put the high difference in deaths down to a number of factors, primarily the “poor handling of the pandemic in the North”. He favoured more stringent measures to curb the spread of the virus.

Dr Scally also complained that not enough information on the North’s testing and tracing system was being published, and that this system was not speedy enough.

Dr Scally said he did not have proof but, based on the figures and the higher incidence rate in Northern Ireland, his suspicion was that the testing and tracing system was too slow compared with the system in the Republic. “The figures speak for themselves,” he said.

Dr Scally said if testing and tracing was too slow, it obviously followed that more people would contract the disease in Northern Ireland.

As an example, he posited, “if it takes someone three days to get a test and five days to get the answer to that test, by that time other contacts will have developed the illness and also be infecting people. The whole thing is dependent on being fast. If you are slow you are ineffective.”

The testing and tracing system, which is run by the North’s Public Health Agency, has been subject to criticism during the period of the pandemic, with Sinn Féin Assembly member Pat Sheehan last month saying it was about as “useful as a chocolate fireguard”.

The agency said it had taken a “major step forward” in early October by moving to a new “digital first” model, which would provide online self-service contact tracing for the majority of people who tested positive.

In the Assembly on Tuesday, Minister for Health Robin Swann said the vast majority of track and trace cases were being successfully detected.

The health department has also stated that “due to differences in testing strategies and the way in which deaths are reported, direct comparisons are likely to be difficult”.

In relation to the island as a whole, Dr Scally said it was a “scandal” that the opportunity to tackle the virus was not properly taken during the summer when deaths and cases were very low.

He said at the time there should have been “some managed isolation on the ports and airports”.

“At that stage the numbers were so small that they could have been got down to zero quite easily on the island,” said Dr Scally. “But there was no chance of that happening because cases were being introduced by people arriving from abroad.”