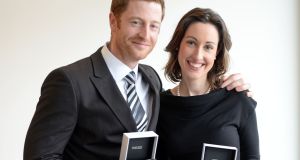 A paramedic and his girlfriend who rescued a young tourist from the sea after she was swept off a cliff by a wave on the Aran Island of Inis Mór have been presented with an award for quick thinking and bravery.

Séamus McCarthy from Cork and Fionnuala Quigley from Wexford were among 42 rescuers involved in 24 “near death” incidents for which they received awards from Irish Water Safety in Dublin on Tuesday.

Garda Brian O’Donnell, who sent a short video of the incident to Irish Water Safety to help raise public awareness of being too close to the edges of the Atlantic ocean coastline was also given an award. The clip has been viewed more than 30,000 times on YouTube.

Mr McCarthy, a paramedic with Ennis ambulance service, said he and Ms Quigley had arrived at Inis Mór on a boat on the morning of April 8th. They hired bicycles and headed to an area known as Poll na bPeist or the Worm Hole, which is used for cliff-diving events.

“It was a lovely day so we just chilled out there for 15 or 20 minutes or so, just watching the water and the waves.”

They had been just about to leave to cycle on to Dún Aengus, when they noticed a tourist at the cliff edge taking a photograph.

“Suddenly, what seemed to be a large, freak wave came in up over her head and just washed her clean off the cliff, down about 30 to 40 feet on to rocks below.

“We got an awful shock because we were only 20 or 30 feet away from where it happened. We just pulled out our phones to try and call for help but we had no reception at all.”

Ms Quigley said they saw her backpack get dragged out to sea and thought she would also be taken by the waves.

“Initially we thought she was going to be dead,” said Ms Quigley.

Another tourist threw down a backpack and they lowered it down to the woman hooked from a jacket.

“We just managed to use the jacket to pull her up to the ledge we were on and from there back up to the top of the cliff again,” said Mr McCarthy.

The young woman, Apu Gupta (21), was lifted by helicopter to hospital and she made a full recovery.

The couple visited Ms Gupta in hospital and they accepted an invitation from her family to visit them in Kolkata during the summer.

“Tragically an average of 135 drownings occur in Ireland every year,” he said.

“And although that’s 135 too many, the figure would be even higher but for the dramatic efforts of these individuals who saved others from drowning and the ongoing work of volunteers teaching swimming and rescue skills.”

Six children under 14 were among those who drowned last year, twice the average number each year.

Mr Kelly also presented long-service awards to 84 Irish Water Safety volunteers, with some 1,535 years of service between them.

The other award recipients were: