‘Culture mayors’ proposed to boost nightlife in Dublin and Cork 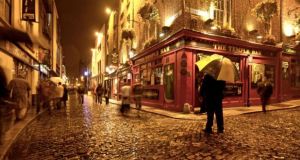 Some 73 per cent of Dubliners held a negative view of the city’s nightlife, with high prices and poor public transport major concerns. Photograph: Frank Whitney/Photographer’s Choice/Getty

The Night Mayors from Merrion Street could soon radically overhaul Ireland’s after-dark social scene and bring the curtain down on what a Minister described as a “vanilla and bland” offering frequently served to people.

Night-time has earned itself a central place in the programme for government proposed by Fine Gael, Fianna Fáil and the Greens, with a focus on how to make Ireland more attractive at night. This focus, advocates of the night say, is long overdue and not only because pubs, clubs, music venues and theatres are on their knees as a result of the pandemic.

A recent survey published by Dublin City Council found that locals consider going out in the capital to be less attractive than doing so in Berlin, London and Amsterdam. Some 73 per cent of Dubliners held a negative view of the city’s nightlife, with high prices and poor public transport major concerns.

The programme for government commits to working with parties from across the night-time culture sector to “develop innovative approaches to enable it to function and to create a vibrant, diverse, and sustainable night-time economy”.

It promises to establish a Night-time Economy Taskforce in its first 30 days in office and a review of regulations and policies governing night-time culture at a national and local level “including the staggering of trading hours for pubs, late bars, clubs, and restaurants”.

As well as modernising licensing laws and application processes, the programme supports the establishment of the night-time culture mayors for Dublin and Cork. Some major European cities have appointees who liase with venues and authorities.

The architect of the plans is Minister for Culture Josepha Madigan, although she was pushing an open door as the Greens had similar plans in their manifesto. Fianna Fáil was broadly supportive of the moves.

Ms Madigan said she had “pushed for the inclusion of a plan to improve nightlife around the country” and pointed out that there were still “very few alcohol-free options” for people. Citing the annual Culture Night initiative, she suggested that “national cultural institutions open at night time to do things which are both unexpected and exciting”.

She accepted that Dublin rates “very poorly when it comes to nightlife” when compared to London and Berlin and stressed that change was possible.

“Something like this has never been on the table before and whoever the new minister for culture is can push this forward,” she said. “I think night mayors would be a great option but what we need is collaboration to get away from the homogeneous and the vanilla and the bland offerings so our nightlife can be enriched.”

Sunil Sharpe, of campaigning group Give Us The Night, welcomed Ms Madigan’s view.

“When we first started campaigning for more to be done for night-time culture in Ireland we were 30 years younger than the politicians we were trying to make contact with but now we’ve got a bit older and they have got a bit younger so they get it, they understand what it is that is needed,” he said.

“There have been many broken promises but that doesn’t mean we’re not cautiously optimistic.”

Give Us the Night has frequently raised concerns about the closure of high-profile venues and nightclubs and the tightening of the licensing laws.

Mr Sharpe said many people believe the city is not for them after a certain time. He said permits should be available to clubs to allow them “go until six or seven in the morning”.