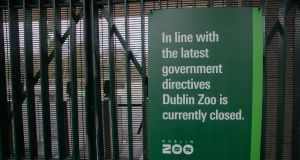 Dublin Zoo which is closed due to Covid-19 in the Phoenix Park Dublin. Photograph:Gareth Chaney/Collins

Dublin Zoo has put in place social distancing protocols to ensure its animals are not infected by Covid-19.

It follows an incident in New York where a four-year-old female Malayan tiger at the Bronx Zoo tested positive for the coronavirus.

The tiger, named Nadia, was infected by an asymptomatic zoo keeper who did not know he had the virus. The tiger had a dry cough, but had not exhibited other serious symptoms.

Three other tigers and three African lions have showed symptoms of the disease in the Bronx Zoo, but have not been tested for it. All the animals are expected to make a full recovery.

In a statement Dublin Zoo said none of the felines in its care or any other animals have shown symptoms of respiratory illness.

The zoo added: “To ensure the safety of its staff and animals, Dublin Zoo has put in place strict social distancing protocols for the animal care team in line with HSE guidelines.

“Precautionary measures have also been taken to safeguard against reverse zoonosis, the transfer of Covid -19 (or indeed other pathogens) from humans to felines or other animals.

“Precautions include wearing of appropriate PPE including masks during feeding and cleaning activity, regular disinfection of equipment, and regular hand washing and disinfection.”

Scientists believe that Covid-19, along with other coronaviruses such as Sars and Mers, came originally from infected animals.

In February, Chinese researchers published an article in Nature that concluded the Covid-19 virus is “96 per cent identical at the whole-genome level to a bat coronavirus”.

This phenomenon is known as “zoonotic spillover”, but reverse zoonosis is not as well understood.

There is no evidence yet of an animal dying from coronavirus contracted from a human .

The zoo has been closed since March 12th following the Government announcement that all schools were to close.

On March 25th it issued a further statement stating that the zoo will remained closed until April 20th.

The zoo said its staff will remain in place during this time to ensure the ongoing continuity of care for the animals.

1 Luke ‘Ming’ Flanagan bares his bottom half to European Parliament
2 Trump turns to bible for photo op as DC burns around him
3 Gardaí investigate Dublin Black Lives Matter protest over Covid-19 rule breach
4 Coronavirus: Public urged to stick with ‘tough’ restrictions to allow phase two to proceed next week
5 Covid-19: Easing of restrictions ‘unlikely’ to be speeded up
Real news has value SUBSCRIBE