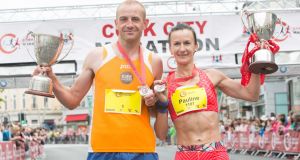 Winners of the 2014 Cork marathon. This year’s event has been postponed indefinitely. File photograph: Darragh Kane

Cork City Council has decided to defer this year’s Cork City Marathon, which was expected to attract around 10,000 competitors, in an attempt to curb the spread of coronavirus.

Ms Rogers said the priority for the council was to keep participants and spectators safe. She said they had decided to postpone the marathon, originally scheduled for May 31st, due to public health concerns.

The marathon is managed for the council by Davis Events. The company’s safety and operations director Mags Connolly said recent weeks have been “challenging” for all of the organisers.

“We take participant safety extremely seriously and know that with the current strain on emergency resources, we wouldn’t be able to provide the world-class response teams needed for our marathon in May.”

Ms Rogers and Ms Connelly said both organisations would be working hard to make sure the event, which first began in 1982, will return in the near future.

The marathon is the second major event on Leeside to fall foul of coronavirus, also known as Covid-19, following the decision to cancel the upcoming Cork International Choral Festival, estimated to be worth around €10 million to the local economy.

The board of the festival announced that it was taking the decision to cancel with “considerable regret” but was doing so “based on the present situation at national and European level in relation to the Covid-19 virus.”

Up to 800 choir members from a variety of countries including Canada, Czech Republic, Croatia, Estonia, Finland, Germany, Greece, Italy, Slovenia, Sweden and the USA were due to travel to Cork for the event.

The festival, established in 1954, is an important item on the cultural calendar in Cork. Last year, it was estimated that around 50,000 people attended concerts at over 90 venues in the city and county.

The board said it was aware that the cancellation of the event, due to take place from April 29th to May 3rd, will have a major effect on “the cultural, economic and social life of the city.”

It is only the second time in its 66-year history that the Cork International Choral Festival has been cancelled – the only other cancellation took place in 2001 during the foot-and-mouth disease crisis.