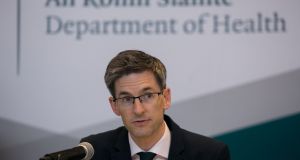 Another 67 cases of Covid-19 were confirmed by the National Public Health Emergency Team on Friday, bringing the total number of confirmed cases here to 26,995.

No new deaths were reported, so the total number of deaths in the State as a result of the pandemic remains unchanged at 1,774.

Eighteen of the new cases are in Dublin, 17 are in Kildare, nine are in Clare and five are in Limerick. The remaining cases were reported in counties Carlow, Cork, Donegal, Laois, Longford, Offaly, Tipperary, Wexford and Wicklow.

A substantial 16 of the cases have been identified as involving community transmission, meaning the cause of the infection is not known at this point.

There has also been an increase in the number of contacts per confirmed case to six, according to acting chief medical officer Dr Ronan Glynn, who urged people to keep their social contacts low in order to limit the spread of the disease.

“We have seen cases rising all across the country this week. We must continue to do all we can to avoid a return to where we were in March and April,” he said.

“We all have a responsibility to stop this [Covid-19]. Social distancing applies to all age groups – wherever you are this weekend, keep your distance.”

Of Friday’s new cases, 35 are men and 32 are women. Seventy per cent of the cases are aged under 45. Some 38 cases are associated with existing outbreaks or are close contacts of a confirmed case.

Meanwhile, a leading public health specialist has warned Ireland is “sleepwalking” towards a major Covid-19 outbreak later this year unless a radical change in national strategy is adopted.

Prof Ivan Perry, dean of public health at University College Cork, says Ireland could reduce incidence of Covid-19 to zero by introducing tough new measures for the next six weeks.

“Without a fundamental change in the current strategy of attempting to live with the virus, we are sleepwalking towards a major surge of infections in October–November of this year,” he warned.

“If we are willing to adopt more restrictive measures over the next few weeks, there is a real possibility that we can avoid this winter surge, begin to open up our economy and return to near normal life much earlier than is likely with the current policy of temporising with the virus.”

Prof Perry is part of the Zero Covid Island group of experts which is proposing a ban on all non-essential travel, testing and tracking of all incoming people and more active case finding and contact tracing

Meanwhile, care-home-related deaths are still accounting for half of the coronavirus deaths in Northern Ireland, the latest figures from the Northern Ireland Statistics and Research Agency (Nisra), published on Friday, have shown.

Nisra reported that in the week to August 7th there were four coronavirus deaths in Northern Ireland, taking its total death toll over the period of the pandemic to 859.

This compares with the figures from the North’s Department of Health, which up to the same date had recorded 556 deaths.

The department figures differ from the Nisra statistics in that they mainly relate to deaths in hospital and patients who had previously tested positive for the virus. Nisra’s figures go wider in that they relate to death certificates in the wider community where Covid-19 was recorded as a factor in the death.

Nisra said that further analysis of the figures illustrated that of the 429 deaths of care home residents involving Covid-19 up to August 7th, 81.4 per cent (349) occurred in a care home, with the remaining 80 in hospital.

“On this basis, deaths of care home residents account for 49.9 per cent of all Covid-19-related deaths. However, no assumptions can be made in relation to where or when the deceased contracted the disease,” said Nisra.

The statistics body said that over the past 19 weeks there were 1,035 “excess deaths” in Northern Ireland – that is, deaths above the average for the corresponding period in previous years.

Nisra further reported that people aged 75 and over accounted for two-thirds (65.1 per cent) of all deaths and 80 per cent of coronavirus-related deaths registered this calendar year up to August 7th.

The North’s Department of Health in its daily bulletin on Friday afternoon reported one more coronavirus-related death, taking its total recorded death toll to 558. The hospital patient who died was aged under 40.

The department also reported 74 new cases of coronavirus, bringing its total number of confirmed cases to 6,299. There were 242 new positive cases in the past week. So far 169,430 people have been tested for the virus in Northern Ireland.

Meanwhile, the North’s Minister for Health Robin Swann reported that there have been more than 250,000 downloads of the StopCOVID NI proximity app since it went live two weeks ago.

“Surpassing a quarter of a million downloads in just two weeks is a fantastic achievement and I want to thank everyone who has taken the time to download the app,” he said.

“Since going live 39 diagnosis keys have been uploaded, and 19 exposure notifications to self-isolate for 14 days have been issued to close contact matches, thus helping to limit the spread of the infection,” he added.

Dr Eddie O’Neill, the consultant medical adviser and product manager who led the development of the app, said: “The app comes at a really important time, ahead of winter and a potentially very challenging time for our health service. We must use this time to prepare.”

“It’s important that as many of us as possible are using the app and are familiar with the process. This will inevitably help limit transmission in any future second wave that we may face in the winter, along with the manual test, trace, protect contact tracing programme,” he added.