The Chief Medical Officer of the HSE Tony Holohan has said that further progress is required before lifting lockdown restictions. Video: RTE 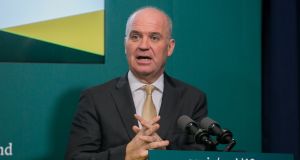 Dr Tony Holohan said he was ‘more firmly of the view’ against recommending lifting restrictions than he had been last week. Photograph: Gareth Chaney/Collins

Nursing home patients diagnosed with Covid-19 are less likely than others to be admitted to hospital for treatment, new figures show.

While 14 per cent of virus cases overall have been hospitalised, seven per cent of nursing home cases have been transferred for treatment to hospital, according to the National Public Health Emergency Team (NPHET).

The deaths of another 18 patients diagnosed with Covid-19 were reported by NPHET at its briefing on Monday.

There have now been 1,102 Covid-19 related deaths in the Republic.

An analysis of cases up to last Saturday shows 57 per cent were female and 42 per cent were male, and the median age was 49 years.

The number of cases associated with healthcare workers now stands at 5,204.

Asked about the possible lifting of restrictions after May 4th, chief medical officer Dr Tony Holohan said he was “more firmly of the view” against recommending this than he had been last week.

He cited a number of factors, including “continued, small, persistent” increase in admission of patients to ICU, the number of cases overall and the continued challenge posed by outbreaks in care settings.

While he was hopeful of improvements as the week goes on, there was “still a way to go” and further progress was needed.

“While the numbers have improved, they’re still big numbers,” he said, pointing out that half of the standing ICU capacity was being used.

Dr Holohan said the most important things NPHET had to be satisfied with before recommending any change in current restrictions was the incidence rate of the virus, which needed to be as low as possible in terms its transmission in the community and within community and residential settings. “In addition, the impact of the disease on rates of mortality and hospitalisations including admissions to intensive care units also needs to be at a very low level.”

“It is down to the wire,” he said, in relation to the possible easing of restrictions adding that NPHET was prepared to change its mind depending on progress.

An analysis of 903 deaths up to the weekend shows 431 had been hospitalised and 56 had been admitted to ICU. A total of 778 patients had underlying conditions. The median age of patients who died was 83 years and the mean 81 years.

The gap between male and female fatalities is narrowing, with men now accounting for 53 per cent of deaths.

Dr Holohan said there were now 355 clusters of the disease in residential settings, including 211 in nursing homes. A cluster is defined as two or more cases.

A total of 3,875 cases were associated with these clusters in residential settings, including 3,048 in nursing homes.

Of the total of 641 deaths in residential settings, 500 were laboratory-confirmed cases of Covid-19, while the rest were treated as probable or supected cases of the disease.

A total of 420 of 546 deaths in nursing homes were laboratory confirmed, with the balance accounted for by probable/suspected cases.

The number of people seeking testing is expected to rise again when the case definition for the disease is changed on Tuesday, he said.

Earlier on Monday, a senior Government official said the public’s “patience and resolve” to comply with Covid-19 restrictions is “waning” as she appealed to people to “keep going as best we can”.

Liz Canavan, assistant secretary general at the Department of Taoiseach, expressed concern at reports on social media “that some people are getting very fed up of the social distancing measures”.

“They’re feeling confined, they’re stuck in the house or local area, and they’re having to queue to get into shops. We do know how frustrating it is, and we know people’s patience and resolve is waning,” she told a briefing at Government Buildings Monday.

Ms Canavan urged people to continue to observe the restrictions on movement introduced in response to the coronavirus.

“This is what is required of each and everyone of us at each step to delay the transmission of Covid-19. We know that call has not fallen on deaf ears so far . . . For now we just need to keep going as best we can.”

Asked if the Government wished to dampen expectations of the restrictions, due to run until May 5th at least, being relaxed next week, Ms Canavan said any decisions on this would be guided by the public health advice. She indicated that it was not yet clear what actions would be taken.

However, she said that the Government was very conscious of “anticipator behaviour” which saw “people get ahead of where we need to be”.

She warned there was a danger that people would expect relaxation of the restrictions next week and will begin to reduce their observation of social distancing over the bank holiday weekend.

New figures from the Department of Employment Affairs and Social Protection show that almost 600,000 people are receiving the special ¤350 Covid-19 weekly unemployment payment. In addition, almost 50,000 employers are now availing of a wage subsidy scheme for some 350,000 workers.

Lack of transparency will ‘damage uptake’ of contact tracing app

Lifting Ireland’s lockdown: what are the plans?

Italy prepares for staged end to lockdown beginning next week

Meanwhile, the chair of the Covid-19 Expert Advisory Group has said there is a delicate balancing act between testing and restrictions which was why there had been a move to change the testing criteria. Adjusted testing criteria, to be introduced early next week, will lead to increased referrals for testing from GPs.

Dr Cillian De Gascun warned that there will need to be “triage” testing because if each of the 3,500 GPs in the State was to broaden the case definition and refer four more patients per day that would “potentially” put “significant pressure” on testing facilities.

He said he wanted to see more testing to determine the level of infection in the community.

Dr De Gascun, who is also director of the National Virus Reference Laboratory, told Newstalk’s Pat Kenny show that the number of people dying from coronavirus is still a concern.

The current figures provided “a mixed picture” he said. The numbers going into hospital and into intensive care are going down, which was positive, but the number of deaths were still a matter for concern.

A further 26 deaths from coronavirus were reported on Sunday, bringing the State total to 1,087. There were 701 new confirmed cases of the disease, bringing the total number to 19,262.

Dr De Gascun also said that those who exercise should be conscious of others and observe a wider distance because “they are panting or breathing more heavily, exhaling more”.

“They should give others a wide berth,” he said.

He said he was not “anti-masks” but that surgical masks should be prioritised for health workers and if the public wished to they should wear cotton masks in retail settings.

Loosening of restrictions for over 70s

Obstetrician and gynaecologist, Dr Carmen Regan has said that “a lot of joined up thinking” would be required on testing if restrictions to prevent the spread of Covid-19 were to be lifted.

“We are in the containment phase, testing will have to be ramped up,”she told RTÉ radio’s Today with Séan O’Rourke show.

Dr Regan said she anticipates some loosening of the restrictions on the over-70s who will be allowed go for short walks and to go shopping at specific times, if they are wearing masks.

Delays in reaching the weekly target of 100,000 coronavirus tests until the third week in May have raised doubts about the State’s capacity to lift lockdown restriction when they expire next week.

HSE chief executive Paul Reid said on Sunday that the health service would not reach the weekly target until later in May despite its concerns about the capacity to meet the target set by by the Department of Health’s health emergency team 10 days ago.

Conducting 100,000 weekly tests is seen as a critical step to help public-health experts track an rise in infection rates if lockdown measures are relaxed.

Mr Reid said the HSE had been operating on a “war zone” footing since the crisis began but a more sustainable model was needed to manage the virus “well into 2020, mostly likely into 2021”.

He acknowledged that there were “constructive tensions” between the HSE and the Department of Health after its National Public Health Emergency Team announced plans to ramp up testing to 100,000 suspected cases a week.