Cork road objectors ‘unlike those fighting Apple in Athenry’ 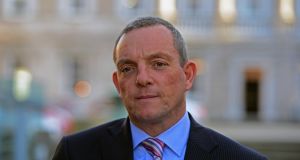 Fine Gael Senator Jerry Buttimer said residents of suburbs such as Douglas, Rochestown and Grange were not opposed to the M28 motorway but rather the route chosen by Cork County Council. Photograph: Eric Luke/The Irish Times.

Cork residents opposed to the proposed M28 motorway between the city and Ringaskiddy had reasonable concerns unlike those opposed to an Apple data centre in Co Galway, a planning hearing has heard.

Fine Gael Senator Jerry Buttimer said residents of suburbs such as Douglas, Rochestown and Grange were not opposed to the motorway but rather the route chosen by Cork County Council and Transport Infrastructure Ireland.

Residents from Douglas, Maryborough, Rochestown, Shanbally and Ringaskiddy have objected to the proposed N28 route, saying that it will have a serious impact on their quality of life through increased noise pollution as well as devaluing their properties.

Mr Buttimer said affected residents recognised the economic benefit it would bring to the entire Cork region. However, he said Rochestown and Douglas were already suffering from heavy traffic congestion at peak times and the proposed route involving the upgrading of the existing N28 to a motorway would not alleviate this problem. The project would only add to noise pollution which is already above EU limits, he said.

Former Green Party TD Dan Boyle said upgrading the N28 represented a further imbalance between investment in road infrastructure and public transport which had been weighted towards the former in Cork over the past 40 years.

Mr Boyle pointed out that despite visionary plans such as the Land Use Transportation Study (LUTS) in 1978 and the Cork Area Strategic Plan (CASP) in 2001, there had been little investment in public transport with the re-opening of the Midleton rail line being the only such investment.

This contrasted with the situation in Dublin where investment in public transport had led to the establishment of the DART and the LUAS, he said, adding that it reflected “a poverty of thinking” when it came to public transport in Cork. Upgrading the N28 to a motorway was evidence of the same approach.

Mr Boyle acknowledged that the upgrade to a motorway was being driven in part by the desire to service industry in the Lower Harbour area but such development should have been located on the eastern side of Cork Harbour where there was an existing rail link to Cobh.

Michael Noonan, of RPS Consulting Engineers for Cork County Council, told the hearing that four possible routes were examined to provide a motorway link between the city and Ringaskiddy and that upgrading the N28 was deemed the optimum approach.

Dermot Flanagan, counsel for Cork County Council, told the hearing that upgrading the N28 would involve the acquisition of 142 hectares of land affecting some 82 landowners along the 12.5km route from Bloomfield to Ringaskiddy.

Mr Noonan said upgrading the N28 from the Bloomfield Junction was the best option as it would result in increased traffic carrying capacity with mitigation measures such as noise barriers and low noise road surfacing reducing the impacts in suburban areas at its northern end.

The alternatives examined would all encroach into exposed rural areas dominated by pasture farmland and would be more visually prominent, he said, adding that these would also require significant new road infrastructure in already developed areas.

In contrast, upgrading the N28 from the Bloomfield Junction up Carr’s Hill to the Shannonpark Roundabout provides the most direct and cost effective route at an estimated construction cost of €100 million excluding VAT, he said.

Mr Noonan explained that upgrading the N28 would increase its capacity to meet predicted traffic growth and that while traffic volumes will increase on the section of the N28 between Carr’s Hill and Bloomfield, the increased capacity of the motorway would ensure that peak hour congestion and delays currently experienced will be reduced.