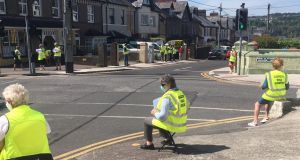 Residents living near University College Cork have called on the HSE and gardaí to use powers available under health legislation to stop students and others having house parties.

Magazine Road and Surrounding Areas Residents Association spokeswoman Catherine Clancy said the gardaí and the HSE should use the 1947 Health Act to stop parties in the area in the interest of public health.

Ms Clancy said the residents understand that the 1947 Health Act gives the HSE the power to enter and investigate houses where it is believed there is a breach of health regulations including those governing Covid-19.

“We are calling on the HSE to connect with An Garda Síochána, who already have the information on these houses as they have been called on over the last four or five days, to go in and close them down,” she said.

“This weekend we have seen yet again more lockdown Covid-19 house parties in the area and enough is enough. We have brought this as far as we, as a community, can and it’s now up to the relevant bodies to deal with this.”

Ms Clancy, a former lord mayor of Cork city, said the 1947 Health Act has provisions including penalties of fines and jail for those who breach the regulations and the authorities should seriously looking at utilising it.

“A property where there has been an outbreak of an infectious disease such as Covid-19 could have serious implications for the future sale or letting of the property,” she added.

UCC president Prof Patrick G O’Shea and CIT president Dr Barry O’Connor along with the presidents of the colleges’ student unions Ben Dunlea and Aisling O’Mahony called for an end to such parties and appealed for students to behave responsibly.

“In the past week there have been distressing incidents of antisocial behaviour in our local community, particularly in the College Road and Magazine Road area,” they said in a letter issued to all students.

In the letter, they acknowledge many instances of such behaviour did not involve UCC and CIT students but they urged students to adhere to national health guidelines and act responsibly and respectfully at this anxious time.

“We have a shared responsibility to ensure we protect ourselves and our community, and, while term has finished, students acting irresponsibly are reminded that they are still subject to disciplinary procedures.”

They said that both UCC and CIT were working together with gardaí and the local authorities on this issue and they encouraged all students to demonstrate behaviour that “protects you and our community”.