Cork profile: Fine Gael likely to hold its own in contest

Labour appears the most vulnerable to an anti-government backlash 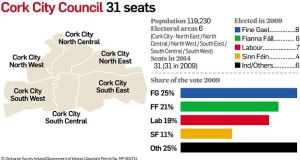 Fine Gael replaced Fianna Fáil as the largest party on the council in the last election with eight seats (since increased to nine) and the party will seek to maintain its dominance, running 14 candidates – three more than Fianna Fáil who saw its seat numbers drop from 11 in 2004 to just six in 2009.

In 2009, Labour took its ever largest number of seats on the council when it won seven but with former lord mayor Michael Ahern retiring, the party will be doing well to retain its remaining six seats in the face of a strong campaign by Sinn Féin which is running eight candidates.

Issues
National issues such as discretionary medical cards, water charges and property tax are dominating on the door steps and Labour, to judge from the opinion polls, is getting the blame for much of these.

Labour is fighting a rearguard action in Cork and the challenge its candidates now face is similar to that facing Fianna Fáil in 2009 with the party hoping the work done on the ground by sitting councillors and their own personal vote will insulate them from the general antipathy to the party. Such is the case in Cork North East where former lord mayor, Labour’s John Kelleher, is likely to be in a fight for one of the last two seats with Workers Party veteran Cllr Ted Tynan, and Sinn Féin neophyte Stephen Cunningham, who is hoping to take a seat for the party in the four-seat ward.

Although Labour will be under pressure, Clancy should benefit from a high-profile year as lord mayor of Cork while O’Flynn and Gosch as incumbents should shade it over their running mates to leave no change in the five-seat ward.

North West proves to be even more intriguing with Sinn Féin councillor, Mick Nugent – who replaced party colleague Cllr Jonathan O’Brien upon his election to Dáil Éireann – and Fianna Fáil sole runner, Cllr Tony Fitzgerald, both looking safe for the first two seats in the four seater. Sinn Féin is running a second candidate in Ken Collins and the final two seats are likely to be between him, outgoing Fine Gael councillor Joe O’Callaghan and former Labour lord mayor, Cllr Mick O’Connell, who may benefit from the plethora of Independents which is likely to fracture the protest vote.

In Cork South Central, Labour’s councillor Lorraine Kingston had a huge vote in 2009 with more than 25 per cent of first preferences and even allowing for a drop in Labour support, she should hold on while Independent Mick Finn and Sinn Féin’s councillor Fiona Kerins should also be elected.

Outgoing Fine Gael councillor Emmet O’Halloran is joined on the ticket by photographer Billy McGill and Micheál Martin’s brother, Seán, a sitting councillor, is joined by former councillor Tom O’Driscoll on the Fianna Fáil ticket while Independent Paudie Dineen could also put in a strong showing.

Sinn Féin councillor Henry Cremin will hold his seat leaving Fine Gael’s third candidate vying for the sixth seat with sitting Labour councillor, Ger Gibbons, who will be hoping to pick up the vote of his retiring party colleague, Michael Ahern, who is stepping down along with Fine Gael veteran Brian Bermingham.

In the final analysis, Fine Gael is likely to more or less hold what it has, Fianna Fáil may gain one or two while Sinn Féin and the Independents may also gain, most likely at the expense of Labour which appears more vulnerable, particularly in working class areas, to an anti-government backlash.