Confusion for passengers as Ryanair cancels thousands of flights

Airline blames increased holiday leave requirements, and denies it has shortage of pilots 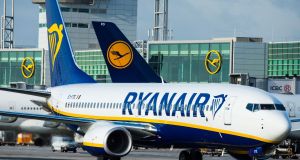 Changes imposed by the Irish Aviation Authority in line with European law means Ryanair must bring staff holidays in line with the calendar year from January. Photograph: Andreas Arnold/AFP/Getty Images

Ryanair’s surprise move to cancel thousands of flights over the next six weeks has created confusion among passengers as to which flights will be affected.

As well as air traffic control strikes and weather disruption, the airline said the decision was taken to meet a requirement for holiday time for its crews following the introduction of a new roster structure as required by regulators.

Changes imposed by the Irish Aviation Authority (IAA) in line with European law means Ryanair must bring staff holidays in line with the calendar year from January, requiring it to allocate that leave before the end of the year.

In a letter to its pilots on Wednesday, seen by The Irish Times, Ryanair’s chief operations officer Michael Hickey said the change in holiday allocation patterns had “posed significant challenges”.

It said the “crewing forecast” to the end of the year is for “tighter pilot numbers” as the impact of the need to give time off, together with other issues, “decreases pilot availability significantly month on month”.

“We will be shortly contacting all those pilots who have been allocated a month off to determine their availability to operate some duties during this month off to protect the integrity of the operation during the remainder of the flight year.

“This is a unique one-off issue where an imposed transition on our normal leave year has created short-term challenges.”

Ryanair said in a statement to customers: “Your flight is operating as scheduled unless you have received an email confirming a cancellation. Please check the email address used to make your booking.”

Industry sources have claimed Ryanair has a shortage of pilots, while Norwegian airlines recently confirmed 140 of them had joined it this year. In its letter, Ryanair said it had a “surplus of operational pilots in July and August and a healthy overall crewing ratio”.

A statement from Ryanair said the “increased leave at a time of ATC (air traffic control) capacity delays and strikes, has severely reduced our on-time performance over the past two weeks to under 80 per cent.

“By cancelling less than 2 per cent of our flying programme over the next six weeks, (until our winter schedule starts in early November) we can improve the operational resilience of our schedules and restore punctuality to our annualised target of 90 per cent.”

In a statement, the IAA said “Flight Time Limitations”, a European regulatory requirement applicable to all member-state airlines, “is now being introduced by Ryanair to align with the European calendar year of January to December”.

A spokesman for Ryanair could not be reached for comment regarding future cancellations.

Meanwhile, passengers on social media expressed frustration and confusion as to the status of their flights.

In Rome, Alex Currie (26) arrived at check-in with his grandmother Mary McEvoy (69) to find their flight had been cancelled. They had not been informed prior to arriving at the airport at 8.30am, he said.

“The only way to describe it was bedlam. There was one Ryanair person trying to deal with everyone,” he said, explaining that other stranded passengers had differing ideas of what had happened and what solutions were available.

Mr Currie said it would have cost him and his grandmother almost €1,000 in total to book alternative flights with another airline and so they managed to negotiate a deal with their hotel to remain for the weekend.

“No one seemed to know why [the flight was cancelled],” he said. “There was only this one woman behind the counter . . . no one to offer any kind of support that you would need in a situation like that.”