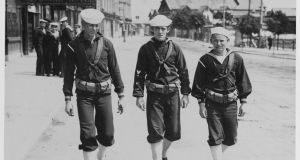 US sailors in Cobh

Descendants of two of the most significant figures in the conflict at sea during the first World War are among those scheduled to speak at a conference at University College Cork on Wednesday to mark the centenary of the US Navy deployment to Ireland during the war.

Mr Jellicoe, whose book Jutland: The Unfinished Battle will speak about defeating the 1917 submarine threat while Mr Sims will speak about how the war at sea tends to be overlooked when it comes to popular coverage of the first World War.

Among the other speakers at the Winning the Western Approaches - Unrestricted Submarine Warfare and the US Navy in Ireland 1917-1918 conference is Dr Jann Witt of Laboe Naval Memorial in Kiel, Germany who will speak on the Imperial German Navy and the first World War.

Organiser, Dr John Borgonovo of the School of History at UCC explained that the conference will explore the period in which American warships and seaplanes largely based in Cork Harbour and Bantry Bay guarded the western Atlantic shipping lanes from German submarines during 1917-1918.

The US Navy entry into the war began when six destroyers arrived into Cork Harbour in May 1917. The event was remembered earlier this year at a special ceremony in Cobh where the deputy chief of mission at the US embassy, Tim Forsyth recalled the events of 100 years ago.

“They braved rough waters, gale-force winds, and German U-boats to protect commercial ships around Great Britain and France. Unrestricted submarine warfare by the Germans was a huge threat and the sinking of the Lusitania and several other US merchant ships was on everyone’s minds.”

The UCC conference features several Irish experts among them Gerry White of the Irish Defence Forces who will speak about Victoria Barracks and the Safe Harbour and Daire Brunicardi of the National Maritime College who will speak about Queenstown (now Cobh) and the Royal Navy 1914 to 1918.

The conference will also feature a lecture by Damian Shiels of Rubicon Heritage who will speak about Irish ‘Colleens’ and American ‘Tars’: Ireland’s First World War American War Brides. For full details on the conference, visit www.ucc.ie/en/history/news/fullstory-767888-en.html