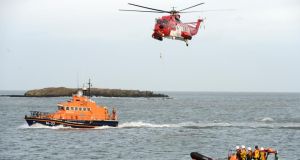 The Irish Coast Guard was called out to 76 incidents over the last five days. It said it experienced a “surge” in calls over the last number of days due to the good weather.

Met Eireann confirmed Wednesday was the hottest day of the year so far, with temperatures reaching 28.6 degrees at the Phoenix Park.

Incidents include moving injured people on beaches, missing persons on beaches, people getting into trouble swimming or on small boats along with jet skis travelling too close to the shore.

Sunday, June 18th was the busiest of the five days for the Coast Guard, with a total of 18 incidents, followed by Wednesday, June 20th, with 17.

“There has been a surge with the good weather,” said a spokesman for the Dublin Coast Guard. “There’s more people out and about. Normally you would see an increase around weekends, bank holidays or when the kids get their school holidays.” Met Eireann said it is 40 years since Ireland has experienced such a heatwave during June. A heatwave is defined as five consecutive days when the temperature is five degrees above normal.

The normal peak temperature for this time of year is 16 to 18 degrees but in the last five days, temperatures have often been in the mid-twenties.