Clampers have to clock off as hour change crashes system 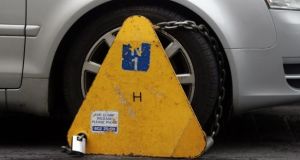 The failure of the ParkbyText system, operated by National Controlled Parking Systems, was described by one employee contacted by a midlands motorist unable to pay for his parking as a “Y2K moment”. Photograph: The Irish Times

The clampers who prowl more than 300 public and private car parks across the State had to be stood down yesterday after a software glitch caused by the clocks going forward crashed the systems of one of the largest parking operators in the Republic.

The failure of the ParkbyText system, operated by National Controlled Parking Systems (NCPS), was described by one employee contacted by a midlands motorist unable to pay for his parking at a train station as a “Y2K moment”.

The system failure caused early morning panic for thousands of drivers who tried unsuccessfully to use text messages or an app to pay for their parking ahead of returning to work after the bank holiday weekend.

Although the crash was initially frustrating for commuters trying to park in train and Luas stations, among other locations – and saw a spike in calls to the NCPS call centre – it had the unintended benefit of forcing the company to stand down its clampers at hundreds of car parks.

It said it did not enforce on ParkbyText sites “in order to ensure that no vehicle was incorrectly immobilised”.

A spokesman added that the service issue “has now been fully resolved and customers have not had their vehicle incorrectly immobilised”.

NCPS would not reveal how much revenue had been lost as a result of the glitch but it is one of the largest parking operators in the Republic with over 1,100 sites and more than 70,000 parking spaces under its control.

About 300 of its car parks allow motorists to pay for their parking electronically.

Its clients include Dublin City Council, Irish Rail, Aldi, the Dublin Docklands Development Authority and UCD. In 2014 it was also appointed to manage the Luas park-and-ride facilities.

“The issues experienced by ParkbyText customers were caused by the clocks going forward and a software error ,” the company spokesman said.

“We would like to apologise for any inconvenience caused to customers.”