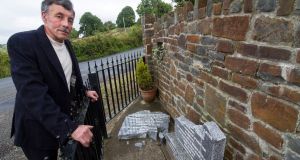 An attack on a Co Kerry Civil War monument to five soldiers killed in a booby-trap bomb set off by Anti-Treaty forces has been condemned by politicians from all thee main political parties.

The granite monument to five members of the National Army blown up in the booby-trap explosion at Talbot Bridge near Knocknagoshel on March 6th, 1923, was attacked earlier this month and badly damaged in what was the second assault on it in three years.

Ben Brosnan from Knocknagoshel, who was on the committee involved in erecting the monument in November 2013, said that people in the locality were shocked.

“We were bitterly disappointed at the destruction of the monument,” he said. “We thought everything was settled with regard to what happened in the Civil War, but this is the second attack on the monument. Someone attacked it about six months after it was erected.

“Whoever attacked it went at it with some force because there’s not much room to swing a sledge between the railing and the monument but they did fair damage to it. I got an awful shock when I saw the damage, it was like I was hit with a sledge myself.”

The following day some nine IRA prisoners were taken from Ballymullen Barracks in Tralee and chained to a landmine at Ballyseedy, where all but one, Stephen Fuller, were blown up. Five men were also chained to a mine at Countess Bridge in Killarney but one Tadhg Coffey was blown clear.

Five days later on March 12th another five republicans were chained to a landmine at Bahaghs near Cahersiveen, having first been shot in the legs to prevent them from escaping. All five were blown up as the Free State Army, under Maj Gen Paddy O’ Daly exacted bloody revenge for Knocknagoshel.