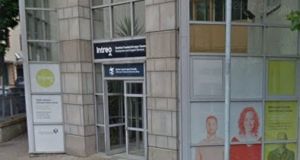 Rory Lenihan pleaded guilty to 12 sample charges of receiving payments for information while he was working at the Department of Employment Affairs and Social Protection in Letterkenny, Co Donegal (above). Photograph: Google street view

A former civil servant who sold the personal details of hundreds of people has been sentenced to two years in prison with the final year suspended.

Rory Lenihan received almost €22,000 over a three-year period from private investigators while he was based at the Department of Employment Affairs and Social Protection in Letterkenny, Co Donegal.

Lenihan, aged 50 and originally from Dublin, had pleaded guilty to 12 sample charges of receiving payments for information.

Details of how Lenihan, a clerical officer in the treatment benefits sections, stayed behind during his lunch break to access details and to make phonecalls were given earlier this week at Letterkenny Circuit Court.

Delivering his judgment on Friday, Judge John Aylmer said he considered Lenihan’s actions to be in the mid range for such offences.

He said there was a significant breach of trust and privacy of all citizens’ information held by the then Department of Social, Community and Family Affairs where Lenihan had worked.

This resulted in an undermining of public confidence and that Lenihan’s sole motivation was personal gain.

The judge said he had no option but to impose a custodial sentence because of the gravity of the offences and the fact that they took place over a prolonged period of time.

There were a number of mitigating factors in the case including the fact that Lenihan had no previous convictions, the case had cost him his marriage, he had shown genuine remorse and the Probation Service had said there was a low risk of Lenihan reoffending.

He had also lost his job, was now on social welfare and that there would be adverse publicity from the media’s coverage of the case.

Lenihan had pleaded guilty to 12 sample charges of stealing information from social welfare recipients and selling them to two private investigators.

The court was told that this information, including the location of those involved as well as their loans, were then passed on to various banks and solicitors’ offices.

The extraction of the personal information had lasted from January 2008 until October, 2010.

In total Lenihan, of Ballaghderg, Letterkenny, was paid €23 for information on each person whose data he accessed. The money was paid in lump sums to his Ulster Bank account in Donegal town.

He was paid by two private investigators, a John Buckley, based on the Navan Road and a Brian Foy, with a business address in Leixlip, Co Kildare.

Detective Garda Peter Cullen said the investigation was a complex one which he had been working on for between three and four years.

He said he was aware that from examining Lenihan’s bank records from the time that he faced various financial difficulties.

Lenihan had no previous convictions.

Defence barrister Peter Nolan said this was a criminal act carried out by someone who wasn’t a criminal. He added that his client was the only one before the court despite the fact that two others were directly involved and the information had been passed on to various financial institutions.

Mr Delaney said the DPC had conducted a detailed investigation in 2010 and 2011 of three companies in the insurance sector.

The investigation had established that social welfare information had been supplied to the insurance companies by a firm of private investigators, having been disclosed to them by the defendant Rory Lenihan.

“The form and scale of the offending behaviour which came to light in the investigation of this case was shocking. This case stands out as one of the most serious data breaches ever uncovered in this State,” Mr Delaney said.

“That a civil servant, who had ready access for the performance of his official duties to the social welfare records of every customer of the department, abused his position and trawled through those records and passed on personal information from them to private investigators in exchange for corrupt payments is scandalous and appalling.”

“Today’s court outcome should serve as a very clear warning to employees in all sectors against snooping through, or disclosing to, unauthorised third parties personal data that may be at their disposal in their workplace for the performance of their duties,” Mr Delaney added.

Spike in Covid-19 cases after Christmas a ‘legitimate concern’ Paul Reid 09:22
Allowing gastropubs but not ‘wet pubs’ to reopen based on no evidence - vintners 09:01
Honour front line staff fighting Covid-19 with job security, says President Higgins 07:54
New direct ferry to Dunkirk will be valuable entry point for lorries to Europe after Brexit 07:00
School at centre of major Covid-19 outbreak unaware of case for days 06:57