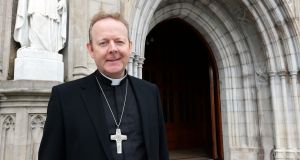 The joint New Year message was from the Church of Ireland Primate of All-Ireland, Archbishop Richard Clarke, the Catholic Primate of All-Ireland, Archbishop Eamon Martin (above), Methodist Church president Rev Dr Laurence Graham, Bishop John McDowell, the President of the Irish Council of Churches and the Rt Rev Noble McNeely, moderator of the Presbyterian Church in Ireland. Photograph: Eric Luke

The leaders of the Christian churches made no mention of the forthcoming abortion referendum in their traditional New Year message.

The referendum is due next summer and is likely to be one where the Christian churches, particularly the Catholic Church, will campaign hard - though it is not yet clear if they will take a unified position on a proposal to repeal the Eighth Amendment.

Instead, the leaders referenced the continuing problems of homelessness which they described as “one of the most tragic and glaring symptoms of a broken system that is leaving too many people without adequate support”.

The joint New Year message was from the Church of Ireland Primate of All-Ireland, Archbishop Richard Clarke, the Catholic Primate of All-Ireland, Archbishop Eamon Martin, Methodist Church president Rev Dr Laurence Graham, Bishop John McDowell, the President of the Irish Council of Churches and the Rt Rev Noble McNeely, moderator of the Presbyterian Church in Ireland.

It criticised government policy on both sides of the Border. In the Republic the leaders said one person in three living in emergency accommodation is a child.

In Northern Ireland it said families with more than two children are among those most at risk from the combination of welfare changes, cuts to services, and cuts to charities.

The statement continued: “Across the world, over the past year, the number of families displaced by conflict, persecution and destitution has continued to rise, placing the lives and futures of more children at risk.

“At the beginning of this new year we add our voices to those calling for increased efforts to provide safety, security and protection for vulnerable families across the island of Ireland and throughout the world.

“Families are the essential building blocks of strong, resilient communities. Our experience in pastoral and social care underlines the centrality of family wellbeing to effective, long-term solutions to the major social challenges we face today.”

The leaders of the Christian churches appealed to political leaders on both sides of the Border to protecting the common good.

They added: “We appeal to them to focus their efforts in this coming year on measures that will alleviate the hardship experienced by families near and far, restoring hope and preventing people being pushed to the margins of society.”

They also noted that the World Meeting of Families at which Pope Francis is expected to attend takes place in August in Ireland.

They said as Christian churches the meeting should “celebrate the importance of families to our churches and the wider community, recognising that our pastoral care of the family is an essential part of our contribution to society.”