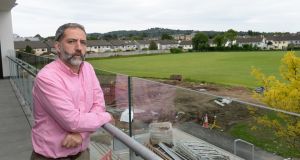 Edward Melly, principal of Clonkeen College, Blackrock, Dublin pictured near the school grounds which are to be sold by the Christian Brothers. Photograph: Dara Mac Dónaill/The Irish Times

The Christian Brothers have warned Dún Laoghaire Rathdown county councillors that attempts to rezone land at Clonkeen College to block a residential development would have “financial consequences”.

The religious group sent a letter to local councillors which said efforts to change the land’s planning zone “would set an extraordinary precedent in national context if selectively rezoned”.

The Christian Brothers plan to sell off 7.5 acres of land owned by the Congregation, that was previously used as playing pitches by the South Dublin secondary school.

At a council meeting on Monday, local councillors discussed the religious order’s plans to sell off the land, and the land zoning regulations in place around school playing pitches and fields.

At the four-and-a-half hour meeting, a motion was passed calling for the council chief executive to compile a report on what land zoning regulations exist around land accompanying school sites. The report into whether lands like those by Clonkeen can be used for residential developments under the existing land zoning regulations will be put before the council in July.

Before the meeting the Christian Brothers property office issued a letter to councillors stating that there would be “very real consequences of a select rezoning” of the Clonkeen land, if it was used to block the development of residential units.

The letter outlined that the Christian Brothers “have reached an agreement for the sale of the selected lands at Clonkeen to a local homebuilder”. The land is reported to be worth up to €18 million.

If the land beside the school is rezoned to prevent a residential development, following a property developer acquiring the site, there is concerns the developer would have grounds to take legal recourse against Dún Laoghaire Rathdown county council. The value of the land would drop considerably if it was specifically rezoned to prohibit any future property developments, according to one source on the local council.

The Christian Brothers letter said “we believe it would be unreasonable and unwarranted if our provisions of free and unfettered access to Congregation lands at Clonkeen to date were now used as the basis for a selective rezoning in an area crying out for residential accommodation, and one with greater access to green and recreational space than many other Dublin communities”.

“As with any land sale this was not an easy decision, but it was taken having made provision for the College’s reasonable future and having also provided free use and access to surplus land for many years”.

Cormac Devlin, Cathaoirleach of Dún Laoghaire Rathdown county council said local councillors “have to see if there is a need to vary the council zoning plan. To see what future safeguards are in place by all schools,” against land in recreational use being sold off for residential development, he said.