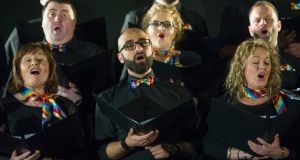 A community choir embracing gay, lesbian, bisexual and straight singers has this weekend launched a charity single to raise funds for the Yes campaign in the forthcoming marriage equality referendum.

Choral Con Fusion is an LGBTS choir based in Cork which has just recorded its first charity single “We Love the Same” to raise funds for and awareness about marriage equality.

Interior designer and choir member Karl Fradgley, who wrote the song, explained the origins of the choir and the decision to release a charity single to help the Yes campaign in the referendum

“We’re a community based choir and we identify as LGBTS - the’ S’ being for straight because we have straight people who are parents or siblings or friends of gay people,” said Fradgley.

“We have people from all different and diverse backgrounds - we have singers from the Lebanon, Denmark, Germany, France, the UK, Morocco, and Holland as well of course as Ireland. ”

According to Fradgley, the idea for the song came to him one day last autumn and he promptly penned the lyric, composed the song and showed it to his fellow choir members.

“I was walking the dogs in October and it kind of popped in to my head - I put it down on paper and put it to the choir committee and we decided to run with it and record it as a single.”

Recorded in Blackwater Studios in Glanworth in North Cork, “We Love the Same” is available for download across some 19 platforms and already the response has been very positive.

“The song is about the universality of love as an emotion and It doesn’t matter who you are, whether you are gay or straight, it’s the same - it’s not a political song, it’s just about love.”

“We just wanted to do this because we are all about inclusivity as a choir and we wanted to mark the referendum and we thought it would be a nice way to raise funds for the Yes campaign.”