Centenary of death of Thomas Ashe marked in Fingal and Kerry 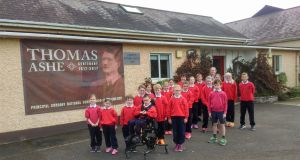 The children of Corduff National School in Lusk remembered Thomas Ashe on the centenary of his death.

Ashe died in the Mater hospital as a result of force-feeding on September 25th, 1917. He had been on hunger strike along with other Republican prisoners in Mountjoy Prison. They had been demanding political status.

Ashe was the principal of what was once a two-teacher school. The school paid tribute by lowering the national flag to half-mast. This was followed by a reading of Ashe’s poem Let Me Carry Your Cross for Ireland, Lord.

All four national schools in the Dublin seaside village attended the community event in Lusk to remember Ashe at Monday lunchtime.

Ernie Donnelly of Lusk Community Council spoke of Ashe as a Kerryman who had enmeshed himself in the community in Fingal.

He praised Ashe as someone whose “keen intellect, leadership qualities and vision for Ireland” might have made a significant cause to the fight for independence had he lived.

Local singer Margaret Brennan sang The Cliffs of Dooneen for Ashe. It is a song about Kerry and not, as has often been assumed, about Clare.

The Mayor of Fingal Cllr Mary McCamley laid a wreath on behalf of the people of the local authority area in memory of Ashe. The Last Post was sounded and the national flag raised.

Members of the public turned out in period costumes for the event and the Black Raven Pipe Band, which Ashe formed, also performed.

The Thomas Ashe Community Group in Lusk have organised a further series of events on Saturday with the unveiling of a sculpture of Ashe at the Round Tower GAA Club in Lusk.

The State commemoration for Ashe took place on Friday in Glasnevin Cemetery. The letter of recommendation from the parish priest in Dingle which secured Ashe a job as principal of Corduff National School in 1908 was read out by a pupil from the school, Sinéad Rafferty. It included the line: “I don’t think you are likely to find within the four seas of Ireland a finer type of Gael.”

On Monday night the centenary of Ashe’s death was marked in his native Kerry with a torchlight procession through the streets of Tralee.

Tralee Irish Volunteers in co-operation with Kerry County Council organised the parade from Ashe Street to The Ashe Memorial Hall where Mayor of Tralee Norma Foley laid a wreath and author of Kerry 1916, Owen O’Shea gave an oration.