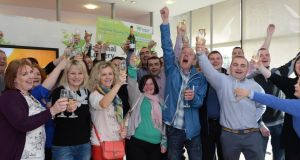 There was an anxious wait for 35 members of a 36-strong syndicate on Sunday evening as their €2 million winning lottery ticket travelled down from Belfast. Allen Hogan (45) had bought the ticket on Friday in Swanlinbar, Co Cavan, on his way to the North and he realised on Sunday morning that the syndicate had won the National Lottery jackpot the previous night. “It was a long drive down with that piece of paper in my pocket,” he said, as he and 32 members of the syndicate collected their winnings at the lottery headquarters today.

He had already rung Bernard Battles (32) that morning so he could get help verifying the ticket numbers. “I couldn’t believe it. We had great craic that night over at Allen’s house when he finally got back from Belfast,” said Mr Battles.

The syndicate is mostly made up of workers of medical device manufacturing company VistaMed, based in Rooskey, Co Leitrim, and each member will get €55,555.55.

The syndicate has been playing the lottery for the past five years and the most they won previously was €100, said Mr Hogan. The group includes a married couple, a few members who have since left VistaMed and a contract cleaner for the company.

The group took a coach down to Dublin yesterday to collect the cheque and were heading back to Rooskey this evening to celebrate. Mr Hogan said his boss in VistaMed wasn’t too put out by having a number of his workforce off today. “He even paid for the coach,” he said.

The National Lottery said the winner of a €3.9 million ticket bought in Decies Mini Market in Ballyfermot on October 2nd has still not come forward to collect their winnings. Lottery winners have 90 days to collect their cheque.