Brothers remembered in stamp to mark centenary of Rising

Ronan McGreevy tells the story of two brothers who fought for and against the British Army. Video: Ronan McGreevy 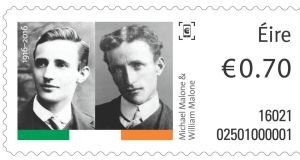 Two brothers, one who died fighting for the British army and the other against, have been commemorated in a stamp to mark the centenary of the Easter Rising.

Sgt William Malone of the Royal Dublin Fusiliers was killed during the Battle of Mouse Trap in Ypres on May 24th, 1915. At the end of that day after a gas attack and assault on their lines, all that was left from the battalion was 22 fit men out of a total complement of 658. It was one of the worst days for Irish regiments during the first World War.

Less than a year later William Malone’s younger brother Volunteer Michael Malone was killed during the Battle of Mount Street Bridge in Dublin on April 26th, 1916.

He and another volunteer, Séamus Grace, had occupied 25 Northumberland Road and between them inflicted huge casualties on the Sherwood Foresters who had just arrived into Dublin to quell the rebellion. Malone was killed when British soldiers stormed the building. Grace escaped.

The Malone brothers feature on one of 16 stamps commissioned by An Post to mark the centenary of the Easter Rising.

An Post says the stamp featuring the Malone brothers is meant to convey “the complexity of Irish identities and responses to the war and the Rising”.

Willie Malone, Sgt Malone’s grandson, said the family were pleased that such an acknowledgement could be made incorporating both brothers.

“It shows that in 2016 we are moving in the right direction in remembering all of those terrible conflicts,” he said.

In 2002 Mr Malone, a sculptor, placed a bronze plaque on the wall of Mouse Trap Farm to remember his grandfather. There was already a plaque at Northumberland Road to remember Michael Malone.

The stamps also commemorate lesser-known figures in the Rising including Seán Foster, the youngest of the 40 children to die. He was just two when he died on Easter Monday 1916.

Another stamp features the pacifist Francis Sheehy-Skeffington, who was executed on the orders of a British officer Captain JC Bowen-Colthurst, and Sir Francis Fletcher-Vane, another British officer, who exposed the killing.

The role of rank-and-file participants is covered by the image featuring Jack Doyle and Tom McGrath. Their image is taken from one of only two surviving photographs of the rebels taken inside the General Post Office during Easter Week. Dr Kathleen Lynn of the Irish Citizen Army and Elizabeth O’Farrell, the nurse who conveyed the surrender around the city, represent the role played by female combatants. Another stamp is dedicated to Louisa Nolan who was a chorus girl in the Gaiety Theatre. She risked her life tending to the wounded at the battle of Mount Street Bridge.

A new feature is the use of augmented reality technology which allows those with a smartphone to find out more about the subject matter by scanning the stamp.