Brokenshire to query North’s leaders on prospects for Stormont talks

Mood downbeat as parties decide whether to return to formal negotiations 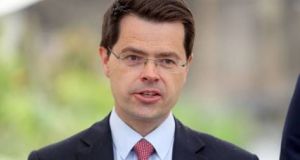 James Brokenshire: he is planning to make contact with party leaders in the coming week to prepare for a return to talks. Photograph: Getty Images

Northern Secretary James Brokenshire is this week due to sound out party leaders on the prospects of reinstating the Northern Executive and Assembly despite a senior DUP MP saying politicians should bow to the inevitability of a return to direct rule from Westminster.

Minister for Foreign Affairs Simon Coveney may also assess the chances of resumed talks ending the political stalemate when he visits Belfast for a business event on Tuesday.

Mr Brokenshire is aiming to bring the five main parties back into formal negotiations from early next week [September 4th].

“He is planning to make contact with party leaders in the coming week, probably by phone calls, to prepare for a return to talks,” said a senior Northern Ireland Office (NIO) source.

Northern Ireland has been without a first minister and deputy first minister since January and a functioning Executive since March. The last round of talks broke down in early July, with the DUP and Sinn Féin deadlocked on issues such as the Irish language, same-sex marriage and how to deal with the past.

Ahead of the expected resumption of negotiations the political mood in Belfast has been downbeat, as exemplified by local newspaper commentary from DUP East Antrim MP Sammy Wilson and writer and former Sinn Féin director of publicity Danny Morrison.

Mr Wilson described the talks so far as a “sham”, and queried the willingness of Sinn Féin to strike a deal.

“The demands and red lines of Sinn Féin are so unrealistic that there is not going to be an agreement,” he said in the unionist-supporting Belfast News Letter.

“Brokenshire is not naive, but I wonder why he continues to be optimistic that a deal can be done. He needs to get real and understand Sinn Féin’s game. While direct rule is not my preference I believe the people of Northern Ireland will be better served by it at this time.”

However, a spokesman for Mr Brokenshire said restoring Stormont was a British government priority. “Northern Ireland needs devolved government, not direct rule, to ensure that effective public services are delivered to all,” said the NIO spokesman.

Sinn Féin Assembly member Alex Maskey, in response to Mr Wilson, said the DUP must clarify if it is serious about reaching an agreement.

“We in Sinn Féin believe a resolution to the current political breakdown is possible if the will is there from all parties, but the DUP leadership needs to clarify whether they are serious about an agreement or not, given this latest rant from Sammy Wilson.”

Mr Maskey said direct rule from Westminster failed in the past and would fail again “because the only democratic vehicle consistent with the Good Friday Agreement is equal partnership government based on parity of esteem and respect, which commands public confidence and can deliver public services, jobs and bring about a step change in a new political era”.

He told the nationalist Irish News that the Sinn Féin support base had become disillusioned with powersharing because of what he said was a DUP failure to reciprocate republican outreach to unionists from the likes of the late Martin McGuinness.

If there were no substantive change in attitude then Stormont would remain suspended for the foreseeable future, he said.

Speaking in a personal capacity Mr Morrison said: “It may well be that we’re at a stage where the unionists, in the guise of the DUP, can’t make this leap. And if they can’t make this leap then republicans have the power to deprive them of power – and that’s what’s going to happen.”

Pubs not to reopen and restrictions to remain on all gatherings , Cabinet decides 18:45
Court approves €35,000 payment to family of infant who died hours after birth 18:36
Former TV presenter dies after car enters water in Co Down 18:02
Ireland needs to move to ‘zero-Covid’ policy to avoid catastrophe, scientists say 17:48
Coronavirus: 45 new cases but no further deaths reported in the State 17:46