British Museum moves bust of Irishman who was a slaveowner 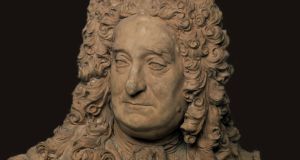 A bust of Irish-born doctor Sir Hans Sloane, which has been moved from a pedestal near the entrance to the British Museum to the Enlightenment Gallery, which addresses Britain’s relationship with the slave trade. Photograph: British Museum

The British Museum has moved a bust from public display of Irish-born doctor Sir Hans Sloane because he was a slaveowner.

Sloane’s bust has been moved from a pedestal near the entrance to the London museum to the Enlightenment Gallery, which addresses Britain’s relationship with the slave trade.

Sloane gifted his collection of 71,000 curios which he had collected in his lifetime to the nation. The collection is housed in both the British Museum and the Natural History Museum.

Sloane was the seventh son of Alexander Sloane, an estate manager for the Hamilton family which still owns Killyleagh Castle in Co Down.

Sloane was born in 1660 and the Hamiltons sponsored his medical education which led to him becoming the surgeon to the Royal Navy’s West Indies fleet and personal physician to the incoming governor of Jamaica.

Through his marriage to Elizabeth Langley Rose, the daughter of Alderman John Langley, one of Jamaica’s largest slaveowners, he inherited large plantations and became a wealthy man.

He used his money to transport thousands of plant specimens from the Caribbean to London and to invest in property in London.

Sloane Square, one of London’s most fashionable addresses, and Hans Place, where the Anglo-Irish Treaty was signed in December 1921, are named after him.

The British Museum has now moved his bust from near the entrance to the Enlightenment Gallery which addresses Britain’s relationship with the slave trade.

“Sloane’s collection was created in the context of the British Empire and the slave economy”, a spokeswoman for the museum said.

Hartwig Fischer, the director of the British Museum, told the Press Association that “dedication to truthfulness is crucial, when we face our own history. Sloane allows us to highlight the complexity and ambiguity of this period. He was a physician, collector, scholar, benefactor and slave owner.

“We will continue to explore our history and we will do this in collaboration with people from across the globe to rewrite our shared, complicated and, at times, very painful history as equals.”

A potential stand-off is now developing between the Black Lives Matter movement and the owners of another statue of Sloane which is in a public place.

The statue stands in Duke of York Square in Chelsea and is owned by Cadogen Estates which has the freehold on hundreds of acres of land within the Royal Borough of Chelsea.

Protest organiser Paul Matthias has said the image is “causing pain and suffering” and is an “insult” to the victims of slavery.

A protest to remove the statue is scheduled for Friday.

Cadogan Estates says it will not remove the statue. “We do not believe that removing the statue from Duke of York Square will help our understanding of the past, or improve the area and believe that Sir Hans should be assessed in his proper historical context and are actively considering how to contextualise the statue,” it said in a statement.

There is also a statue of Sloane in the square of Killyleagh, but there are no plans to move it.