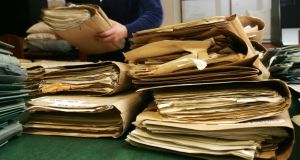 An Phoblacht said an IRA volunteer had been authorised to show the document to an RTÉ journalist prior to Fenn going on holiday. Photograph: Frank Miller

British ambassador to Ireland Nicholas Fenn rang the Department of Justice in August 1987 following media coverage of an alleged leak of a Garda document to the IRA about his protection detail during his visit to Sneem, Co Kerry, for a holiday.

A confidential note prepared by Department of Foreign Affairs official Declan O’Donovan on August 14th said he had been phoned by a Mr Byrne from the Department of Justice that morning.

“The Ambassador told Mr Byrne he was ‘besieged’ by requests from the media for comment and that he faced a difficult situation this afternoon because he would make a presentation to the CAD (Community Action Against Drugs) Committee at which journalists would be present.

“He said he thought it would be helpful for him to give just one interview emphasising his confidence in the Garda Síochána and that a radio interview with BBC would be the best option,” O’Donovan wrote.

O’Donovan said he had spoken to then tánaiste (Brian Lenihan) who agreed that a single statement from the ambassador “would be desirable”. O’Donovan communicated that immediately to the British ambassador.

In Fenn’s subsequent BBC radio interview, he said he had “complete confidence in the Garda” and was grateful to the force for its continuing care of him. He said it seemed to him “very unlikely” that this would produce any lasting damage to cross-Border co-operation.

An IRA statement on August 20th that year said the IRA had made it clear that it “chose not to excecute” the ambassador despite being in possession of a confidential Garda document detailing his movements.

An Phoblacht said an IRA volunteer had been authorised to show the document to an RTÉ journalist prior to Fenn going on holiday.