Brian O'Donnell arrives at the Bank of Ireland AGM to hand back the keys to the Gorse Hill property and confirms his intention to appeal to the European Court of Human Rights. Video: Bryan O'Brien 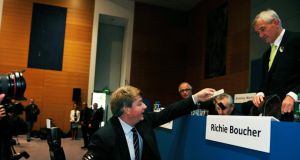 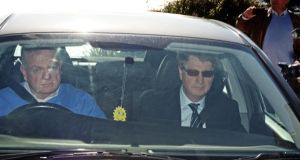 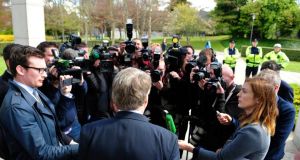 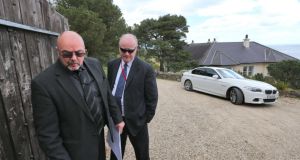 Receivers acting for Bank of Ireland are seen taking possession of Gorse Hill, in Killiney on April 29th. Photograph: Collins 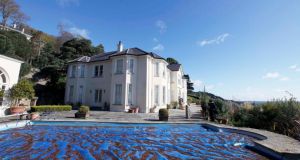 Gorse Hill in Killiney Dublin which was repossessed by Bank of Ireland. Photograph: Collins.

Former solicitor Brian O’Donnell has claimed he was “bullied” by Bank of Ireland over the Gorse Hill property in Killiney and said the bank had “set fire to [his] business”.

In an interview on the Pat Kenny programme on Newstalk, Mr O’Donnell suggested it could take at least five years before a case he plans to take to the European Court of Human Rights (ECHR) is resolved but stressed that his family were “in this for the long haul.

He accepted money was owed to Bank of Ireland and said “we would have paid them back, given time”.

Mr O’Donnell said deals he had put together would have ensured the bank got all its money but these had been rejected by the bank.

He added he had been refused meetings with the bank’s chief executive Richie Boucher on multiple occasions.

He also discussed the bankruptcy laws in the Republic and whether he would give up his legal fight.

“When the bankruptcy began, this whole saga, it [bankruptcy] was 12 years in Ireland which was the most penal bankruptcy regime in the world. The problem is that the banks have to consent to allow you out of bankruptcy.

“If you have a scenario like we have, what can you do? We’re not looking for sympathy but we would like to be able to try to clarify our position.

“We know that this could take another five years until we get justice. We’re in this for the long haul. We don’t like being bullied.”

He said the shareholders of Vico Ltd are his four children and two of them are directors.

“You have to do things legally... there is a court system which is to protect people.

“Vico Ltd is suing the bank. There is no possession order against Vico. We had a right of residence . . . we didn’t own it but were entitled to stay there.”