Cervical cancer death: ‘I’ve so much anger, I don’t know where to direct it’ 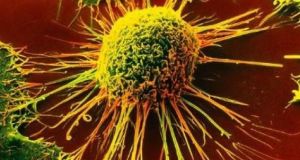 “I answered the phone and she said I’m sorry to have to tell you this but your wife was identified as one of the women, one of the 17 women,” said Paul. File photograph: Getty Images

Another man whose wife received an incorrect smear test result and died from cervical cancer last year has described the “hell” she went through after being diagnosed with the disease in 2013.

“I have so much anger now, I don’t know where to direct it,” said Paul (who prefers not to give his surname).

He was informed this week that his wife Julie was one of the 17 women given inaccurate test results who subsequently died. Julie was given the all clear on her 2009 smear test but was diagnosed with cervical cancer when her 2013 test revealed abnormalities.

She had a hysterectomy and underwent treatment but the cancer returned and she died in April 2017.

Paul tried contacting the family doctor after hearing the news of the CervicalCheck controversy. “When the news broke it was playing on my mind all that weekend,” he told The Niall Boylan Show on 4FM. “I kinda went back to work Monday and a few of our friends started texting me asking me did I hear about all this and I said I did. They said do you think Julie could have been one of these.”

When he failed to secure an appointment with his wife’s doctor Paul turned to a local radio station for help. “I wanted to find out how I could go about finding out if my wife could have been one of these.” He expected to hear back from the station but instead received a call from a HSE representative.

“I answered the phone and she said I’m sorry to have to tell you this but your wife was identified as one of the women, one of the 17 women. I was asked to come up the next day to the hospital which was very uncomfortable for me because I had to sit in the waiting room, the same waiting room we had to go to day one to find out she had cancer.”

Shortly after her diagnosis, Julie also discovered she was pregnant, said Paul. “They done a radical hysterectomy so not only did I lose my wife, we lost a baby as well.” Six months after the hysterectomy, the cancer returned to Julie’s body and she underwent chemotherapy and radiotherapy. She also had an operation to remove the tumour and had to have a kidney removed.

Paul said the doctor who gave him the news of the mistaken smear result indicated that had Julie been treated in 2009, she would have survived. “He said her 2009 smear showed there would have been pre-cancerous lesion and in his opinion she would more than likely have needed the standard procedure. One of my friends that was with me turned around and said ‘so Julie would have been with us today if she had of got that done’ and he said ‘yes, absolutely’.

Just over a year on from his wife’s death, Paul says he was only starting to come to terms with the loss when he received the call from the HSE. “I was kind of getting back on track until I got that phone call ... Up until now I was trying to come to terms with my wife passing away from cancer ... I have so much anger now, I don’t know where to direct it.”

Paul says his seven-year-old daughter believes her mother has gone to heaven. “She just has it in her head that God needed help from a special angel so he picked her mam.”

It has already been confirmed 209 women across the State could have received earlier intervention in their cancer diagnosis if they had got correct smear test results and that 162 of these women were not informed of the review of their case. Attempts to contact them began in recent days. Some 17 of the 209 are dead.